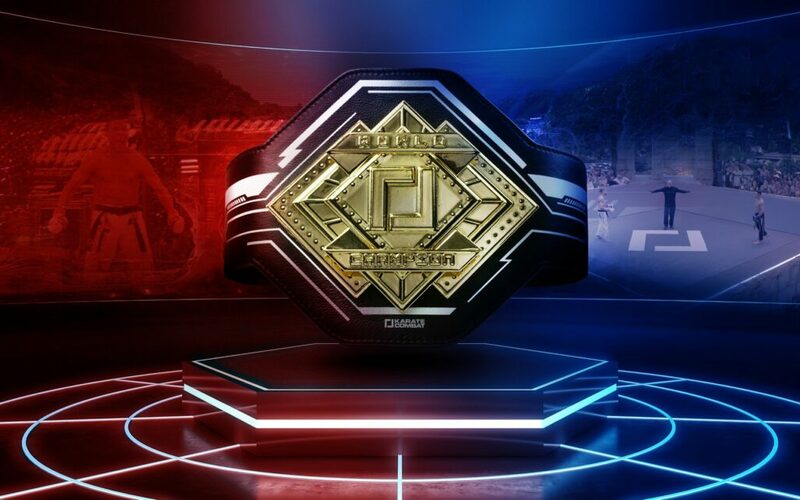 When following a fighter through their career from the beginning, one often sees growing pains as they are forced to change, evolve and adapt. Their early naivete is replaced by experience. They abandon what doesn’t work and innovate or adopt new aspects of their game to replace it. Following Karate Combat, one can see this same process take place event to event in the promotion itself. By slowly altering the ruleset, presentation and commentary, it has gone from being somewhat of a joke to carving out its own little niche in the combat sports world.

This is appropriate, of course, since evolution by necessity is the guiding principle of karate. Originating as a set of kung fu-derived Okinawan combatives, karate has splintered into dozens of individual styles. From self-defence art to vigorous exercise for Japanese schoolchildren to bare knuckle masochism to combat sport, karate has served every role under the sun and changed a little every time.

The result then, is a sliding scale of traditionalism. It is extremely common for karateka to fight in very different ways depending on their training. And it is perhaps appropriate that the first Karate Combat title fight of the new season should pit someone who fights representing the attributes of karate’s past against someone who leverages the potential of modern karate.

First, the traditionalist. Jerome Brown has had it tough lately. Not only was he forced to fight the wily veteran Abdalla Ibrahim who had missed weight by some 31 pounds (an incredible advantage) but Brown would himself collapse from an onset of rhabdo. Not until he’d secured his victory and his title shot however. The British counterstriker was far too slick for that.

Brown’s game is built around four main tools. The first is his calf kick. Derived from the traditional leg sweep, these are the only type of leg kick permitted in Karate Combat. They are also shockingly underused. Competitors stand almost entirely side on in order to set up side kicks and spinning kicks. They also often stand in open position (one in orthodox stance, the other in southpaw). This means that shin to shin contact will be very rare.

In addition, Karate Combat is almost entirely composed of fighters with a sport karate base. As a result, many participants rely on distance management as the primary defence and blitzes as a main source of offence. Committing to leg kicks will strip this away and leave fighters unable to mount an attack or get away to safety. But most of all, it’s an extremely long range, non-committal weapon, which is why it perfectly plays into Brown’s second tool, counterpunching.

The Claws of the Bear

While Brown will lead if he feels he’s in a superior position, in general he’ll stay on the outside. Picking away at his opponents’ lead leg with a calf kick, they have the choice of being crippled or advancing. If they do advance, they play into Brown’s crafty counterpunching game. Brown can counter with a variety of punches, including a hard rear straight to the solar plexus.

Brown comes from a Wado Ryu background, which tends to place a above average amount of emphasis on grappling for a traditional style. As a result, his third tool tends to be his sweeps and dumps. Brown will go to these often, especially to punish a kick heavy game. Ibrahim using his superior size and weight to muscle him around in the clinch, denying him this weapon, troubled Brown hugely in their fight. Brown shows quite a lot of promise in the clinch beyond just throws, however. One of the hardest strikes he landed on Ibrahim was a spinning backfist after a messy clinch exchange coming off of a caught leg.

That’s not to say Brown’s system is flawless. He often throws counterpunches with his chin soaring in the air, leaving himself open in extended exchanges. Brown’s shown some decent pivots when in danger of being caught against the wall, a necessity for any rangy counterstriker. But he’s also prone to sometimes turning completely away from his opponent.

In any striking sport this is incredibly dangerous. In one where Daniel Viveros recently won by seizing a body lock and hurling Stefanos Roupakas on his head with a wild ura nage throw it’s even moreso. No opponent has been able to seriously punish him for any of this yet, however.

There are so many who wish to play the matador in Karate Combat that any who’d rather the role of the bull are a welcome addition. And few come more bullish than Joshua Quayhagen. Quayhagen often takes the initiative with the blitz, charging in under cover of alternating punches. While Quayhagen employs this frequently, he has found most of his success from after the initial attack, being significantly more comfortable throwing hard in the pocket in long exchanges than many of his peers. After the first few punches of the first blitz Muslum Basturk tried to pivot out and was knocked down. He has also benefitted hugely from the rules adaptations that allowed boxing-style tight hooks as opposed to merely ridgehand blows. Rena Messaoudi was on the receiving end of such a blow, which knocked him down too.

Sports karate bouts tend to end after the first blow has been struck. Quayhagen’s persistence in exchanges is likely born from his previous MMA experience. It certainly makes him a knockout threat to anyone else in the division. With their hands low for bouncing in and out and a generally suspect level of head movement, every successive second spent in the pocket with Quayhagen is another risk taken that he might land one of his big hooks.

This risk is further heightened by Quayhagen’s killer instinct. Few in the organisation chase ground-and-pound as quickly and effectively as he does. When Messaoudi was knocked down Quayhagen immediately pounced, dropping a fierce combination that ended with a savage backhand for the finish. In addition, Quayhagen can pressure retreating opponents effectively. As we mentioned before, when the distance is taken away the primary layer of defence is stripped away. Quayhagen is excellent at trapping his opponents in the corners of the pit and getting to work.

With such emphasis on his power punches and blitzing, it’s easy to ignore probably the most dangerous part of Quayhagen’s game. Quayhagen goes to the body. He goes to it early, he goes to it consistently, and he goes to it with force. His best body kick is his mawashi geri chudan, or midline roundhouse kick, but he often uses a spinning back kick and sometimes a front snap kick as well. Sports karate develops many things, but conditioning to committed body beatings is not one of those. Vitale Certan found himself utterly gassed by the end of their fight and barely made it to the final bell.

As for Quayhagen’s weaknesses, they are primarily defensive. While he can show good head movement reactively, in exchanges he’s often less careful and critically, on the advance he can leave himself totally unguarded. Quayhagen’s solitary loss came from getting cracked by a looping left hook from Ibrahim as he rushed in with his hands by his hips and his chin up. Even when Certan gassed there were moments where he tagged Quayhagen on his way in.

Karate Combat: The Preacher and the Counterpuncher

There are two most likely outcomes to this fight. The first would be Brown successfully walking Quayhagen onto a counterpunch. The second would be Quayhagen catching Brown out in a long exchange with a big hook. But the two provide other wrinkles for the other that may heavily complicate matters. Quayhagen is likely to not be as affected by Brown’s calf kick game because his style is not as movement dependant as that of many other Karate Combat competitors. He will often throw such kicks himself.

On the other hand, Brown will likely not bear Quayhagen’s bodywork well, since the outside movement vital for his game is quite cardio intensive and he will be fighting in a full five round match. However, Quayhagen’s main bodywork tool, the mawashi geri chudan, is uniquely vulnerable to being caught. Quayhagen’s frequent use of it may leave himself open to being caught and swept.

Certainly, this match is probably one of the most intriguing available to the fledgling promotion. Both fighters will have an opportunity to play to their strengths; the tricks of the old, and the power of the new.