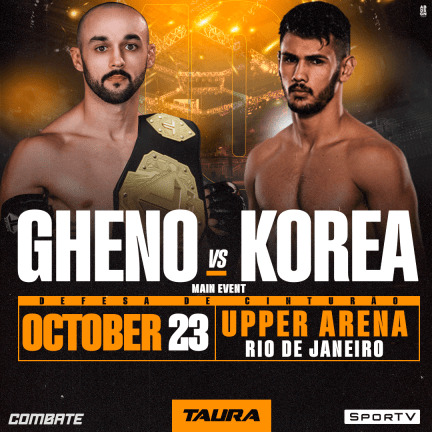 On Friday October 23, Taura MMA puts on their tenth event in Rio de Janeiro, Brazil. We will have Taura MMA 10 results all night long.

There are two titles on the line at the nine bout fight card.

The main event pits Felipe Gheno against Bruno Rodriguez for the flyweight championship. Gheno holds a 9-1 record and captured the 125-pound title at Taura MMA 9, when he knocked out Giliarde da Silva. Rodriguez is 11-3-1 and fought to a draw in his most recent bout against João Elias. Prior to that, the Brazilian was riding a four-fight winning streak.

The bantamweight championship is up for grabs in the co-main event. Sitting at 9-2, Ary Farias will look to keep his four-fight winning streak alive in his promotional debut. He will take on veteran Johnny Campbell. The 32-fight veteran holds a 20-12 record and is currently riding a five-fight winning streak.

Another featured bout is a battle between former UFC fighter Sergio Moraes and Canada’s own Jared Revel. Moraes holds a 14-6-1 record and has not fought since his 2019 loss to James Krause at UFC on ESPN+ 22. The Brazilian is coming into this fight with a three-fight losing skid. Revel is 10-2 and riding an impressive five-fight winning streak. This will be his first professional bout outside of Canada.