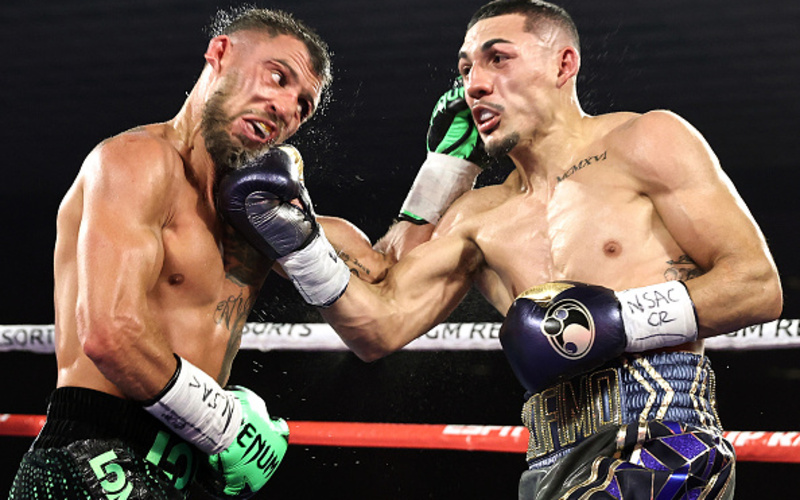 Last weekend saw another super-fight between Vasyl Lomachenko and Teofimo Lopez where no one got humiliated. We’ll drudge up the coffin to put the sport in again. Rats.

But if you really think your time was wasted, we’re going show what went right and wrong for each guy, and how they adapted to each other with their fists, without a ton of jargon. This way we can give both guys more of the respect they deserve and it helps us all understand boxing just a little better. Because Andre Ward commentating can’t do it alone.

The standout technique of a Lomachenko fight is how smoothly he slips out to his right side. If someone wants to beat him they have to try and stop this. To help head start this technique Lomachenko leans his body forward and to the right constantly. It’s his rhythm, and it’s a lot like the lean Roy Jones does.

You’d have to have something snazzy to outclass something so blatantly special, right?

Like with Roy Jones the dynamic of a left-hander/right-hander fight means a committed, long, patient jab can’t help but line up with a head searching for that lean. And Lopez showed great jab variety too; fainting, probing, and especially tapping the gloves with it to exaggerate his length advantage. Lomachenko is skilled enough to pull the lean off anyway, especially since Lopez didn’t pivot left with his jab, but the constant jab pressure from Lopez set a foundation for Lomachenko to scramble for alternatives.

If someone moves to your left, you throw the left hook for them to move into. Simple. Lopez worked his left hook to stop that lean coming in but the best way he used it was feinting it to threaten the jab even more.

Teofimo had other tools to stop the lean. He uses an inside right hook that angles to his right – almost a check hook.

Against right-handers, it lands clean to counter left hands, but a left-hander makes the angles different. Lomachenko would lean and burst in, and that’s when Lopez could catch him with it. Lomachenko’s go-to razzle-dazzle wasn’t safe anymore.

Leaning has to have a counterbalance. Lean forward and right, and you’ll have to lean back and left occasionally. A secret to landing that sinister right hand to the body was waiting for Lomachenko to lean forward before he threw it. That way the right hand would catch him while he was pulling back.

Did you know Lomachenko’s dad pulled him out of boxing to learn traditional Ukrainian dance? He also took the O’s out of Lomachenko’s SpaghettiOs. And the sauce. He just ate air.

But he’s not helpless. By touching Lopez’s right hand coming in Lomachenko could scare him from throwing it long enough to land his own punches.

Remember though, Lopez has a big size advantage. If he sees something he doesn’t like he can bully through, and Lomachenko found too much success leaning and slipping in. So Lopez started pushing him off balance when he took the outside angle. Or really whenever he wanted.

The bigger person almost always decides where a fight is fought. Using your weight isn’t a copout – it’s smart. Those smarts, plus Lopez’s educated lead hand and his right check hook mean he’s a terror, especially someone smaller or left-handed. This fight will go down as a great win since Lomachenko’s certain to find success wherever he goes now. It was a valiant, clever fight from both fighters and was the kind of fight boxing needs more of. And please: Find out if the commentators can talk about anything besides the Ukrainian dance story. Maybe check his yearbook?