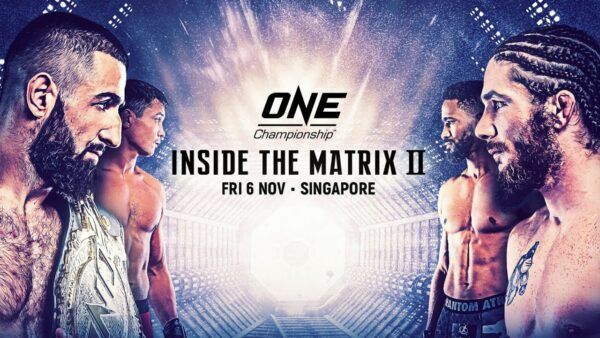 ONE Championship was back on Friday, November 6, with ONE: Inside The Matrix II.

ONE: Inside The Matrix II Recap

The card was headlined by a ONE Welterweight World Championship clash and featured finishes in four of the five contests.

Kiamrian “Brazen” Abbasov retained the gold in Singapore, but it was not an easy first defense for the Kyrgyz.

WHAT A COMEBACK! Kiamrian Abbasov 🇰🇬 retains the ONE Welterweight World Title with a fourth-round knockout of James Nakashima! #InsideTheMatrix2 #WeAreONE #ONEChampionship pic.twitter.com/K8G2U3Xyet

Undefeated American James Nakashima was strong through three rounds with constant pressure. However, as the bout entered the championship rounds, Abbasov began to find success.

On a well-timed high kick, Abbasov’s knee caught Nakashima on the side of the head. With his opponent stunned, Abbasov went for broke and chased the staggering American around the ONE Circle.

After more strikes, including a strong right uppercut, Nakashima fell to the mat where Abbasov added a couple of ground strikes to retain the belt.

Timofey Nastyukhin put a halt to the streak of Pieter “The Archangel” Buist in a competitive three-round lightweight affair in the co-main event.

The victory could move Nastyukhin in a position to contend for the title in 2021.

Meng’s shocking power continued to be on full display as she lambasted Priscilla Hertati “Thathie” Lumban Gaol with one punch in just 86 seconds of work. Wakamatsu’s first-round finish was only 20 seconds longer at 1:46 of the first round but was similar with a laser of a right hand down the middle.

Also in action, rising Indonesian contender Eko Roni Saputra grabbed another finish for his resume with a first-round submission over Ramon Gonzales. The dominant performance will have him knocking on the ONE athlete rankings.

ONE: Inside The Matrix II Full Results

ONE Welterweight World Championship: Kiamrian Abbasov def. James Nakashima by TKO at 3:27 of the fourth round

Yuya Wakamatsu def. Kim Kyu Sung by KO at 1:46 of the first round

Eko Roni Saputra def. Ramon Gonzales via submission (rear-naked choke) at 4:07 of the first round

Meng Bo def. Priscilla Hertati Lumban Gaol by KO at 1:26 of the first round