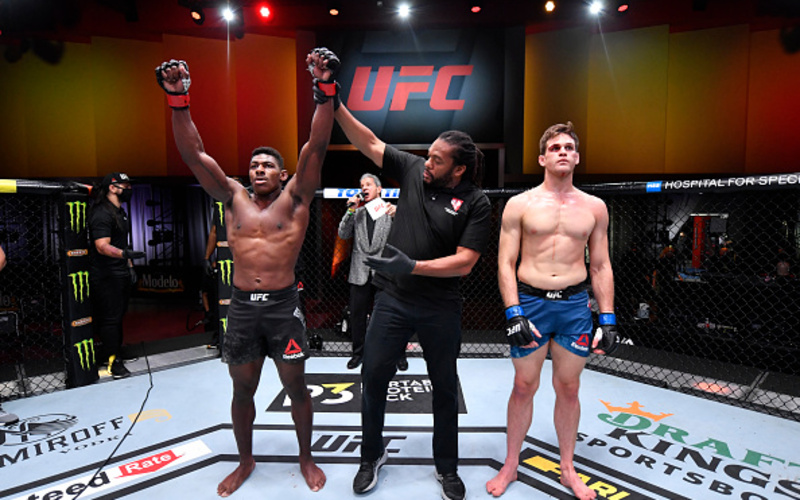 Joaquin Buckley did it again. After a monumental knock out of the year candidate with his spinning back kick KO of Impa Kasanganay, Buckley put away Jordan Wright in the second round at UFC 255.

The 26-year old Buckley squared off against the undefeated “Beverley Hills Ninja” Jordan Wright. At start of the fight, Buckley pressed forward, pushing the pace early. The Missouri native landed with a variety of hard, fast strikes that seemed to earn the respect of Wright. Towards the end of the first round, Wright was able to string together a few good strikes, but Buckley answered with a series of devastating strikes that dropped the Californian. Saved by the bell, Jordan Wright returned to his corner dazed and confused.

The second round did not last long. With Wright still on wobbly legs, Buckley walked him down and pinned him against the cage. Buckley unloaded and Wright ate some viscous hooks that dropped him for good. Herb Dean jumped in to save Wright from any more damage just eighteen seconds in. Arguably, Buckley has another performance of the night bonus headed his way. With the win, Buckley improved to 11-3 professionally.

What’s Next for Buckley

Buckley has put together one of the best 2020s in MMA. Winning three of his four fights, he suffered his only loss to Kevin Holland. With two sensational knockouts, Buckley is a star on the rise. In his post fight interview with Joe Rogan, an animated Buckley called out UFC vet James Krause for a potential fight in January.

No matter what the course is for Buckley, the middleweight prospect is dangerous. With lightning in his feet and sledgehammers for fists, Buckley may be the most dangerous knockout artist in the middleweight division. It would be interesting to see him take on Brad Tavares, Edmen Shabazyan, or Uriah Hall.