2020 has been one strange year, so why not cap it off with a boxing event that’s a bit of a head-scratcher in its own rights? Mike Tyson will face Roy Jones Jr. tomorrow on PPV and before the boxers step into the ring and exchange hooks, the two stepped on the scale then exchanged mean mugs. We’ve got you covered with the action on the scales, and live tomorrow in the ring.

The fight was originally supposed to go down in September but due to Covid and other complications, it was rescheduled until November 28, 2020.

Mike Tyson will be facing Roy Jones Jr. in a special modified rules exhibition match. The rules as best as I can understand them are as follows.

There you have it. It’s an unusual set of circumstances, but when two fighters in their 50’s come out of retirement for a special exhibition match, what do you expect?. Despite the wonky rule-set, there is zero chance I wouldn’t be ordering this event. It brings together two of my favorite fighters from years ago and it could prove to be very interesting.

In the co-main event, a B-level celebrity meets a retired pro basketball player. You read that right. Jake Paul will take on Nate Robinson in a veritable “who’s that” of boxing. Jake Paul has called out MMA stars Dillon Danis and even Conor McGregor and actually fancies himself a pro athlete. He’s not. Nate Robinson is a tough kid out of the Pacific Northwest but there’s no evidence to support his ability to handle himself in a boxing ring. Safe to say, I’ll be watching.

Click the image below to order the event on Fite.tv 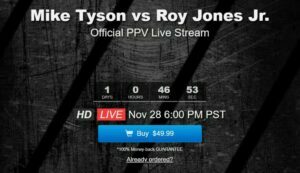 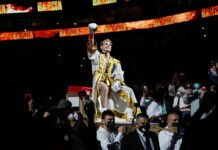 Ryan Garcia Wins Via Vicious Body Shot in Round 7 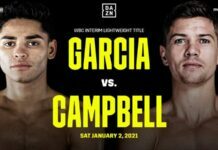