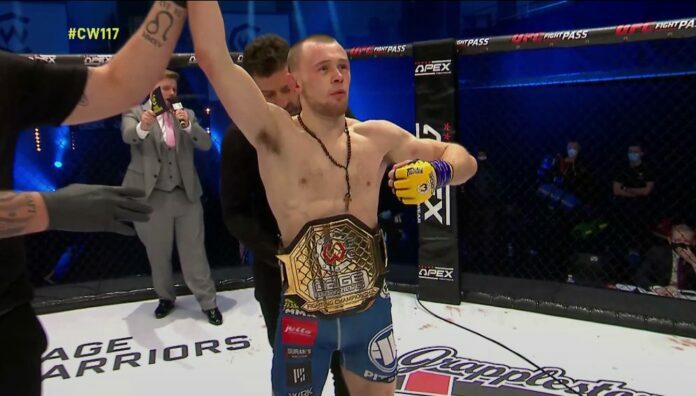 Cage Warriors has a new flyweight champion in Jake Hadley. Hadley, 24, improves his undefeated record to 7-0 after cruising to a unanimous decision over Luke Shanks. In what was largely a lopsided victory, Hadley displayed the better grappling and fight IQ.

Round one opened up with Shanks getting the better of Hadley in the stand-up. A lead uppercut from Shanks rocked Hadley early, however it led to Hadley landing a takedown. The fight almost ended in the last seconds of the first round when Hadley appeared to secure a guillotine. Shanks was able to survive as referee Marc Goddard separated the two at the bell.

The aggressiveness of the former champ turned out to hinder his performance throughout the middle rounds. Shanks overextended on a couple of his strikes which led to Hadley taking advantage and getting the fight to the ground.

In round three it was apparent that Hadley was starting to pull away. The majority of the round was spent with Hadley in back mount. Jake Hadley was able to land numerous strikes and keep the action up through the end of the fight.

Hadley may already have his first defense of the belt lined up. In the co-main event of the evening, flyweight challenger Sam Creasey won by TKO in round three. The win improves Creasey to 13-3. Creasey was unsuccessful in his first Cage Warriors title bout back in June of 2019.

The Trilogy Strikes Back 2

Cage Warriors returns tomorrow night with Cage Warriors 118. It is the second of three straight events for the European promotion. Our very own Josh Yule will have you covered with live updates. It can be seen on UFC Fight Pass starting at 2:15 Pm ET. The main event will have the middleweight championship up for grabs. Nathias Frederick is set to defend his title against “Young Gun” Jamie Richardson.