Bellator 254 concluded a wild year for not just the promotion, but the entire sport as a whole. The event had eight fights in total, with only three going to the judges scorecards. The flyweight championship changed hands and the event saw the debut of what appears to be a future star. Here are the fights to make after Bellator 254.

Velasquez cruised to a unanimous decision victory over Ilima-Lei Macfarlene. She was the much bigger fighter and was able to utilize her size and reach advantage throughout the main event. A rematch could be discussed, however the fight wasn’t particularly close. Liz Carmouche was victorious in her Bellator debut and brings the name recognition that appeals. Another option that could be discussed is newly signed Kana Watanabe. However, Scott Coker usually doesn’t book new free agents with a title opportunity right off the bat.

The debut of “Tiger” lived up to expectations. Magomedov utilized a relentless grappling attack and dynamic striking to win the decision. He now sits atop a very sneaky Bellator bantamweight division. With that said, there’s a plethora of options at 135lbs. Stots is on a seven fight win streak and is rising through the division. With the assumption of Juan Archuleta taking on Sergio Pettis next, the winner of this potential matchup gives matchmaker Rich Chou another elite contender.

Not only is Vassell a former title challenger, he’s now won back-to-back fights at heavyweight. As a result, “The Swarm” has a case for a showdown with a top five heavyweight. He was unsuccessful in his attempt at dethroning champion Ryan Bader, but a matchup with the Russian inches one of them closer to a title opportunity.

“The Chechen Wolf” announced his presence to the division in what was one of Bellator’s best fights of the year. Nikaev improved his undefeated record and by doing so, showed the rest of the 170lb division what’s in store for 2021. Logan Storley was on the wrong end of a split-decision loss to Yaroslav Amosov last month. However, Storley looked very capable of competing with the very best at welterweight. Stylistically, this is one of the best fights that can be made in the promotion. Let’s hope to see it in the first quarter of 2021. 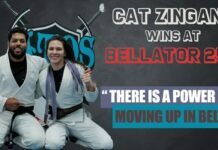