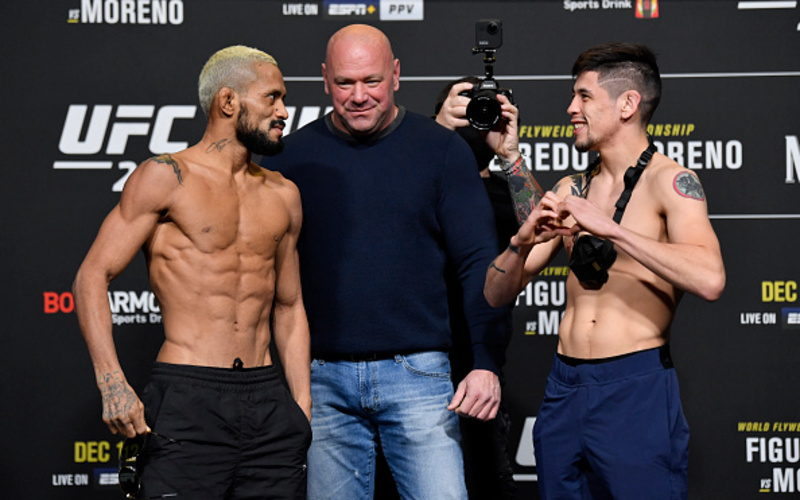 After just three weeks, the UFC flyweight title is on the line once again on Saturday as MMASucka brings you UFC 256 results all night. Three weeks removed from his title defense over Alex Perez at UFC 255, UFC flyweight champion Deiveson Figueiredo looks for his second defense. In his fight with Perez, Figueiredo locked up what he made look like an easy guillotine about two minutes into the first round. He will be taking on another man that fought three weeks ago in number one contender Brandon Moreno. That night, Moreno faced Brandon Royval after his original opponent, Alex Perez, took a short notice title shot. With just a second left in the first round of their fight, after Royval dislocated his shoulder, Moreno finished the fight by TKO.

In the co-main event, former interim UFC lightweight champion Tony Ferguson returns to the cage. In his first fight since suffering the loss to Justin Gaethje at UFC 249, Ferguson will be facing Charles Oliveira. Prior to his loss to Gaethje, Ferguson had won his last twelve straight fights. In his last four fights, Ferguson has picked up a unanimous decision against Rafael dos Anjos. Following that, he would submit Kevin Lee to win the interim title. In his last two outings before facing Gaethje, Ferguson picked up TKO wins over Anthony Pettis and Donald Cerrone.

On the other hand, Charles Oliveira enters this contest having won his last seven straight. All seven of those have been finishes with five of them coming by submission. In two of his last three fights, he earned KO/TKO wins over Jared Gordon and Nik Lentz. His last outing was against former interim title challenger Kevin Lee. Oliveira picked up his 19th win by submission, finishing Lee in the third round. He looks to pick up his biggest win yet as he faces Ferguson at UFC 256.

Kicking off the main card will be a heavyweight fight between former heavyweight champion Junior dos Santos and Ciryl Gane. JDS has lost his last three straight while Gane holds a perfect 6-0 record. Following that fight will be a fight in the middleweight division as Kevin Holland faces off against Jacare Souza. Holland has won his last four straight, all during 2020, while Souza’s last fight was a loss at light heavyweight. Finally, before the co-main event, Mackenzie Dern faces Virna Jandiroba in a strawweight bout. Each woman seeks a third straight win as they enter the fight having won their last two.

Follow along with MMASucka as we provide you with the results throughout UFC 256.

Chase Hooper def. Peter Barrett via Submission (Heel Hook) at 3:02 of Round Three