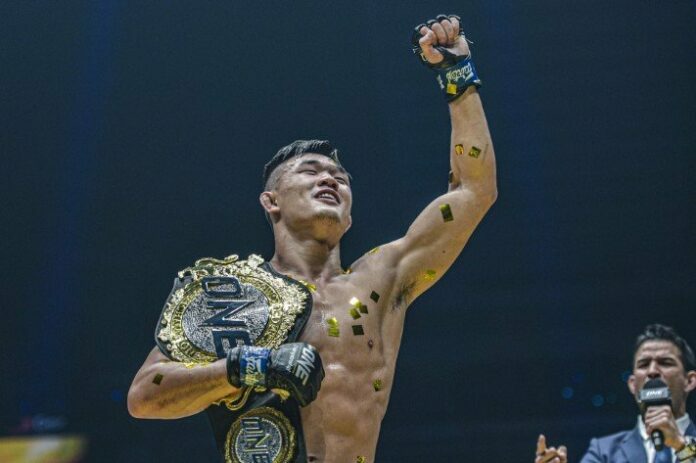 Christian Lee defended his ONE Lightweight World Championship for the first time in 2020, but the new year has the United MMA star eyeing a busy schedule.

At ONE: Inside The Matrix, Lee returned to action with a first-round TKO against Iuri Lapicus. It was the first professional defeat for the Moldovan, and the rapid pace of the bout electrified fans watching around the globe.

Lee wants to get right back to work and build his legacy in the lightweight division.

In an interview with ONE Championship, Lee stated that he wants to defend the belt at least three times in the new year. Additionally, the Hawaii-based Singaporean named names for his first two expected title defenses of 2021.

Said Lee, in the interview, “The way I see it, there are only a few key players left that I haven’t already beaten. I want to knock them off the list. I see Timofey [Nastyukhin] as the first guy, and I feel like he’s earned his shot. He’s taken out Eddie Alvarez, and he just beat Pieter Buist as well. I feel like he’s definitely in line. Of course, the final call is up to ONE Championship.”

Lee’s assessment of the division comes from the official ONE athletes rankings where he has beaten three of the top five contenders.

Lee won the title from the now #4-ranked contender Shinya Aoki and captured the ONE Lightweight World Grand Prix with a victory over #1-ranked Saygid Guseyn Arslanaliev in 2019. Lapicus, Lee’s most recent opponent, is ranked #2 in the weight class.

Nastyukhin stunned the mixed martial arts world when he got a first-round TKO over Alvarez at ONE: A New Era. He followed up the performance last November with the victory over Buist to put himself in the champion’s crosshairs.

The champion also mentioned Alvarez, who rebounded from the loss to Nastyukhin with a stellar performance against Eduard Folayang in August of 2019. The multiple-time lightweight titleholder may not be in the rankings yet, but with his high profile and Lee dropping his name, he will not be far off from getting a crack at the gold.

Christian Lee is set to fight all challengers

Neither bout is signed, but the prospect of both title defenses does show that the ONE lightweight title picture is set for big things in the new year, and Christian Lee is ready to meet the challenges head-on.

An active champion willing to take on all comers is what the sport of mixed martial arts was built upon.

“I’m always going to have excellent fighters to push myself and test myself against. I just see the lightweight division as the most stacked division out there. That makes me feel even better about being the champion of the division,” remarked Lee to ONEFC.com.

Lee has quickly risen to the top and remains one of the sport’s most exciting athletes with finish after finish. And at just 22 years of age, he is only getting started. As the United MMA representative continues to mature, he will develop each aspect of his game to new degrees.

2021 will be a jam-packed year of incredible matches. Lee stands atop the lightweight mountain and excitedly welcomes all challengers. Exactly the type of champion fans love to see compete.