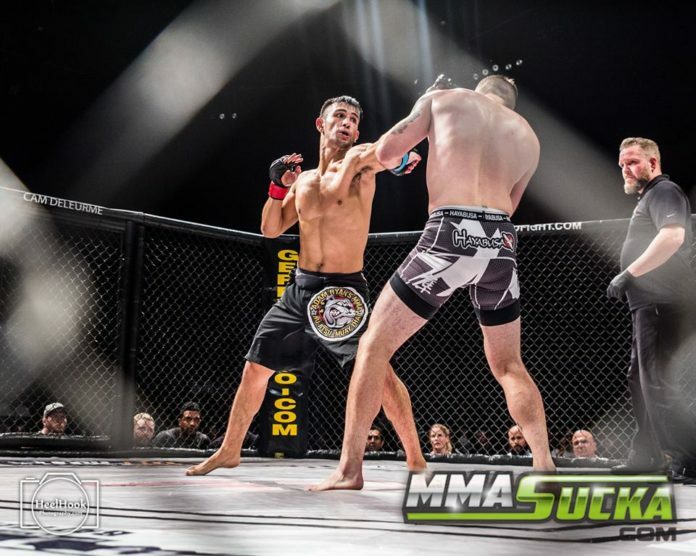 The Battlefield Fight League lightweight title is up for grabs at BFL 66, as champion Achilles Estremadura takes on Curtis Demarce.

The promotion announced the championship bout on Wednesday morning.

Estremadura (6-0) has been on the big promotion radar for a long time. He is undefeated in his professional MMA career and was even a part, as an amateur of the first ever BFL show. The Checkmat Vancouver product is known for his elusive footwork, takedown defense and precision striking power. His most recent bout was at BFL 65 in February, where he took Kerry Lattimer to the judges scorecards, winning in decisive fashion.

Demarce (18-15) is one of the true veterans of Canadian MMA and has fought for almost every major promotion in the country, except BFL. The 32-year-old last fought at the end of 2019, where he lost in the second round to Darren Smith Jr. “The Demon” has not seen a victory inside the cage since 2017, when he choked out Travis Gervais at Mercenary Combat League 1.

The bout between Estremadura and Demarce will serve as either the main or co-main event at BFL 66 on March 19. This will be the first time BFL will air exclusively on UFC Fight Pass.

Another title fight was announced for the first card of 2021, as Caio Machado vs. Lee Mein for the heavyweight championship. Other notable match-ups include, Keanan Kellar vs. Kyran Cameron, Ivan Hryshchuk vs. Drayton Angus, John Nguyen vs. Christian Tremayne and Bryce Gougeon vs. Austin Batra.