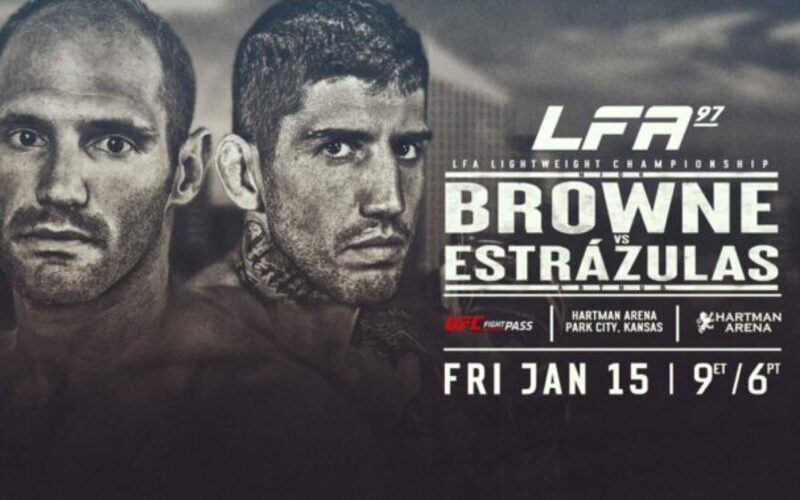 LFA comes at fight fans live tonight from the Hartman Arena in Park City, Kansas. They kick off a new year of fights with LFA 97, headlined by a lightweight title bout between Nick Browne and Arthur Estrazulas. “Nyquil” Brown is riding a three-fight win streak since losing to UFC veteran John Gunther in 2017 and sports a 10-1 record going into the fight. Estrazulas comes from the famed Kings MMA camp and is a 12-4 veteran of both the PFL and Bellator.

The co-main event features a lightweight fight between Jacob Rosales and Jose Martinez. “Lil’ Badger” Rosales is a veteran of the Dana White Contender Series but has lost two of his last three fights to get to a record of 12-6. “Lil’ Juggernaut” Martinez, meanwhile is on a three-fight win streak on the regional scene after splitting his previous six fights.

Two important female matchups take place at this event as well. Headlining the preliminary card is a flyweight matchup between Claire Guthrie and Nadine Mandiau. Both fighters show a bevy of potential and a win could propel them to bigger and better things soon. On the main card, an atomweight matchup between Loveth Young and Kelly D’Angelo takes place. D’Angelo is one of the top-ranked fighters at 105, despite sporting a 4-3 record. Young has fought previously for LFA and King of the Cage, compiling a 2-1-1 record.

Kamuela Kirk def. Guilherme Santos via TKO (Strikes) at 4:25 of Round 1

Michael Stack def. Jordan Mapa via TKO (Ground Strikes) at 4:00 of Round 2

Josh Quinlan def. Joe Boerschig via TKO (Ground and Pound) at 3:28 of Round 3

Thomas Petersen def. Kimo Luis via KO (Straight Left) at 0:19 of Round 1