On January 20th, top ten ranked contenders Michael Chiesa and Neil Magny will be looking to make a bold statement. The welterweight division is wide open at the moment, Gilbert Burns is booked to fight the champion, Kamaru Usman, in March but after him the title picture becomes unclear. You’ve got Colby Covington, Jorge Masvidal, and perennial contender Stephen Thompson in the top five. Not to mention arguably the most hyped fight in the division right now, Leon Edwards vs. Khamzat Chimaev, also carries potential title implications. Both Chiesa and Magny are going into this fight riding the momentum of a 3 fight win streak with the winner in a prime position to fight one of the aforementioned contenders.

Michael Chiesa is a submission-based grappler. His game is to close the distance, push his opponent to the cage, and lace his wiry frame around them. From there he’ll either drag them to the floor or hit a trip and work his way towards back control. ‘The Maverick’ is a great opportunist, unlike most fighters who have a preferred range inside the cage where they are most effective, Chiesa will attack the back from anywhere.

Chiesa’s routes to victory against Magny are (A) submission and (B) decision via ground control. Chiesa cannot allow Magny to stay safely behind his length, he needs to get inside. Not only have most of Chiesa’s wins come by submission, but 4 of Magny’s 7 losses were by submission, all by various chokeholds. Even if it goes all five rounds Chiesa still has a reasonable chance of out-pointing Magny considering that the Ultimate Fighter winner has won all six of his career decisions.

Neil Magny is an all-rounder, eleven of his seventeen wins inside the octagon have come by decision. Standing 6’3” with an 80 inch reach, the tall and rangy Magny fights with a style that takes advantage of his physical attributes. When standing Magny spends little time in the pocket, preferring to maintain kickboxing range. But when the takedown is available Magny will gladly take it, he’s adept on the mat with effective top control and ground strikes. 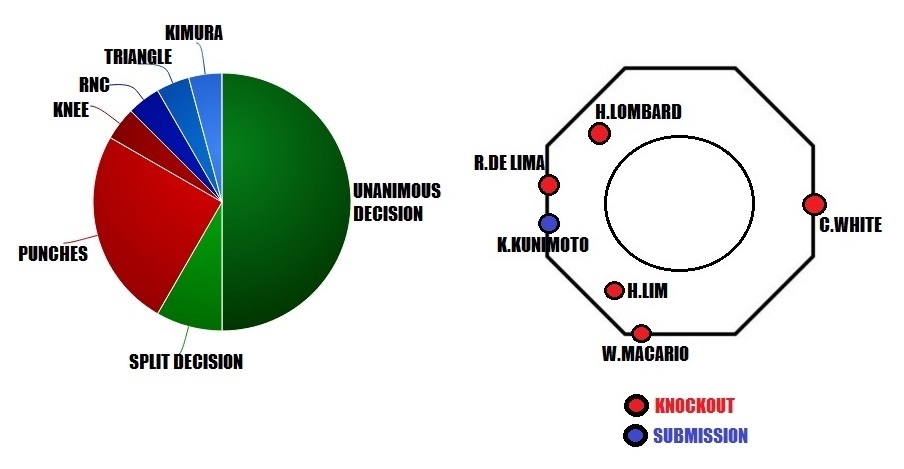 Magny’s route to victory is to keep the fight standing. Although he’s well rounded his biggest advantage in this matchup would be on the feet. He can accomplish this by circling and forcing Chiesa to stay at the end of his 4.5-inch reach advantage, denying takedown and clinch entries. If taken down Magny has the skills to hang with Chiesa but he’s less of a submission threat. Aside from a doctor stoppage TKO, Chiesa’s losses have come by submission which is the least likely method of victory for Magny. That being said, Magny has won 14/15 decisions so if he can avoid the ground game of Chiesa his chance of success becomes likely. 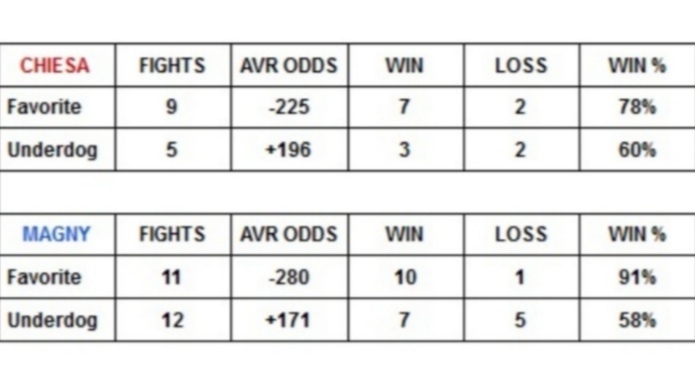