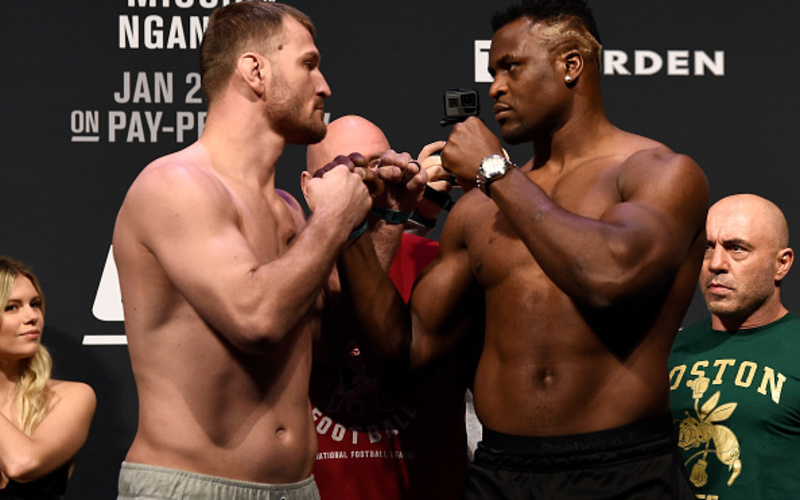 The UFC heavyweight championship belt will be on the line at UFC 260.

According to sources reported by ESPN, the highly anticipated rematch is set to headline as the main event on March 27th as Stipe Miocic will be defending his championship belt against the No.1 ranked contender Francis Ngannou.  The location is still unknown but reported to be likely at the UFC APEX facility in Las Vegas.

Miocic, widely considered as one of the greatest MMA heavyweights of all time, last fought at UFC 252 in August 2020 when he defeated Daniel Cormier to retain his belt. The fight was the last bout of a historic trilogy against Cormier where the latter won the first fight to become the champion, only for Miocic to win back his belt in the rematch to become a two-time UFC heavyweight champion. Their last fight closed out the trilogy as Miocic was victorious and solidified his status as champion and one of the greatest heavyweights in MMA.

Miocic defeated Ngannou in their initial bout back in 2018 at UFC 220 where the American dominated the action as he outwrestled Ngannou after surviving an early onslaught of powerful strikes from the Cameroon native. That night Miocic made history with the most title defences in the heavyweight division, further solidifying his status as one of the best heavyweights to ever do it.

Ngannou will have a chance to correct his loss in the upcoming rematch in March. “The Predator” since then has gone on to knock out the likes of Curtis Blaydes, a pair of legends in Cain Velasquez and Junior Dos Santos, and in his most recent bout against Jairzinho Rozenstruik. All were KO’d in the first round, none of them going past the 90 second mark.

Stipe Miocic and Francis Ngannou 2 is the main event

At UFC 260, Francis Ngannou will have a chance to become the UFC heavyweight champion but must overcome one of the heavyweight GOATs in Stipe Miocic. In the co-main, it has been reported that Alexander Volkanovski will defend his featherweight belt against Brian Ortega.