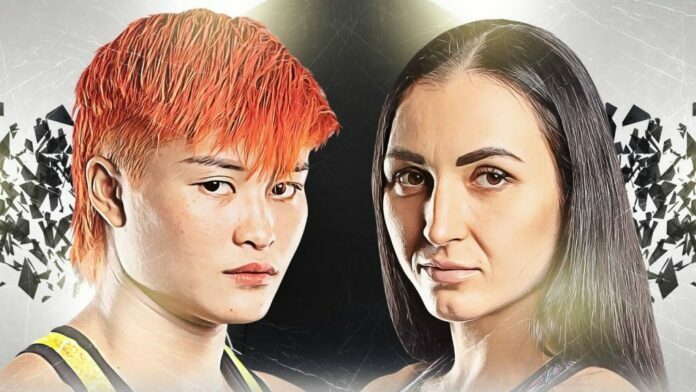 The six-bout card from the Singapore Indoor Stadium saw five of the bouts end before the final bell. With two submissions and three knockouts, there was a little something for everyone on the card.

And there were certainly some talking points at the close of the show.

Stamp Fairtex looked to be well on her way to victory against Alyona Rassohyna in the main event, but a last-gasp guillotine changed everything. The Ukrainian tied up Stamp, but the Thai appeared to be in a position where she could survive until the final bell.

However, her hand came down in a tapping motion. Stamp began to celebrate until it was apparent that the referee stopped the action to award Rassohyna the victory via submission. Replays confirmed the tap.

It was a massive comeback performance for Rassohyna, who kickstarted her ONE career with a major victory. With the ONE Atomweight World Grand Prix looming in the distance, the result could have a massive shake-up in the division.

The co-main event was a three-round bantamweight banger between #2-ranked contender Shoko Sato and Fabricio Andrade.

Andrade’s activity and ability to stifle Sato’s takedowns proved to be enough to earn the unanimous decision, but it was a close battle between the two athletes. With the victory, Andrade should see himself in the rankings very soon.

Ryuto Sawada put in a workmanlike performance against Robin Catalan and earned a first-round submission victory. The Japanese athlete got the back of his opponent and calmly slipped his arm under the chin before applying the bout-ending squeeze.

In a thrilling heavyweight contest, Kang Ji Won battled back from tough positions to earn a TKO stoppage over Iran’s Mehdi Barghi. Kang was mounted twice in the contest but bucked his way out of harm’s way to turn the tide. Once on top, Kang landed strong elbows to earn the TKO stoppage.

Pakistan’s Ahmed Mujtaba got the quickest finish of the night with a sub-minute knockout of Rahul Raju. The Indian came forward with his hands too low, and a crisp, clean right hand landed cleanly in return from Mujtaba. Raju was out cold, and Mujtaba returned with a highlight-reel win.

In the opening contest, Tial Thang did mentor Aung La N Sang proud with a second-round TKO against Paul Lumihi as he continued to make a name for himself in the bantamweight division.

Alyona Rassohyna def. Stamp Fairtex via submission (guillotine choke) at 4:53 of the third round

Ryuto Sawada def. Robin Catalan via submission (rear-naked choke) at 4:19 of the first round

Kang Ji Won def. Mehdi Barghi by TKO at 4:50 of the first round

Ahmed Mujtaba def. Rahul Raju by KO at 0:56 of the first round

Tial Thang def. Paul Lumihi by TKO at 2:25 of the second round

That was our ONE: Unbreakable III recap.