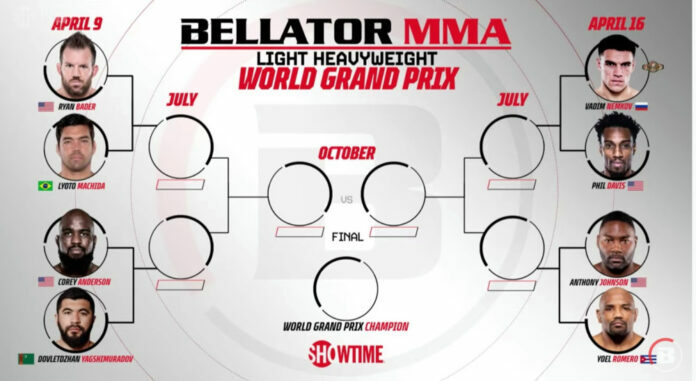 On Tuesday afternoon, Bellator made two announcements. The first was about the promotion’s partnership with Showtime, the second was the next iteration of their Grand Prix. They announced the eight participants in the light heavyweight Grand Prix. Beginning on April 9, here are our early predictions for the Bellator Light Heavyweight Grand Prix opening round.

At the press conference on Tuesday, the opening round of the eight-man 205-pound division was announced.  On April 9 at Bellator 256, Ryan Bader vs. Lyoto Machida and Corey Anderson vs. Dovletdzhan Yagshimuradov kick off the tournament. The other two quarterfinal matchups are scheduled for April 16 at Bellator 257, with champion Vadim Nemkov vs. Phil Davis and Anthony Johnson vs. Yoel Romero squaring off.

Here are our predictions for round one of the Bellator Light Heavyweight Grand Prix.

Bader and Machida have fought in the past. This will be a rematch from 2012 when Machida knocked Bader out in the second round. Much has changed with both fighters since that bout. Since joining Bellator in 2017, Bader has gone 5-1, 1NC, which included winning the light heavyweight championship and defending it on one occasion. Ryan Bader is also currently the Bellator heavyweight champion. Machida was a UFC champion and since signing with Bellator has gone 2-2. He is currently riding a two-fight losing skid. This fight is a classic wrestler vs. striker match-up.

Anderson signed with the promotion last year and made a successful debut, as he finished Melvin Manhoef via second-round TKO. He will face promotional newcomer Yagshimuradov who is riding an impressive eight-fight winning streak. Of those victories, he has a variety of stoppages, which include both knockouts and submissions. This bout between the two 31-year-old’s comes down to who can capitalize first.

Prediction: Yagshimuradov via Round 2 TKO

Light heavyweight champion Vadim Nemkov will make his first title defense against Phil Davis. The champ is riding a seven-fight winning streak and has finished six of his seven opponents. Most recently, Nemkov earned a second-round TKO and the title after beating Bader at Bellator 224. The very durable and wrestle heavy Phil Davis has cracked off a three-fight winning streak, with his most recent one being a split decision against Lyoto Machida.

Prediction: Nemkov via Round 2 TKO

The most anticipated fight of the Bellator light heavyweight Grand Prix is between Anthony Johnson and newly signed Yoel Romero. Two of the heaviest strikers in the light heavyweight division will square off against one another.

President Scott Coker told MMAJunkie.com that he made this fight for the fans. ‘Not only are we going to do the tournament, we’re going to give the fans what they want to see, We’re going to do this fight. The first fight is going to be ‘Rumble’ vs. Yoel.’ Because I believe this. When the fight is there, you have to do it,” Coker said. “… If we waited and put these guys on opposite sides of the bracket, somebody gets hurt. Somebody can’t fight. Things happen in this sport. Things change quickly.

Prediction: Romero via Round 1 KO

Stay tuned right here at MMA Sucka for more live streams as well as videos highlighting the top fighters, commentators, coaches, promoters and other names in MMA and combat sports. We also bring you great offers on the latest MMA products and merchandise and sometimes present top online sportsbooks that are taking your bets. You can also subscribe to our YouTube channel for regular updates and all the latest fight news. You can also check out our sister site, at TheFightBuzz.com for the latest from the world of MMA and other combat sports.