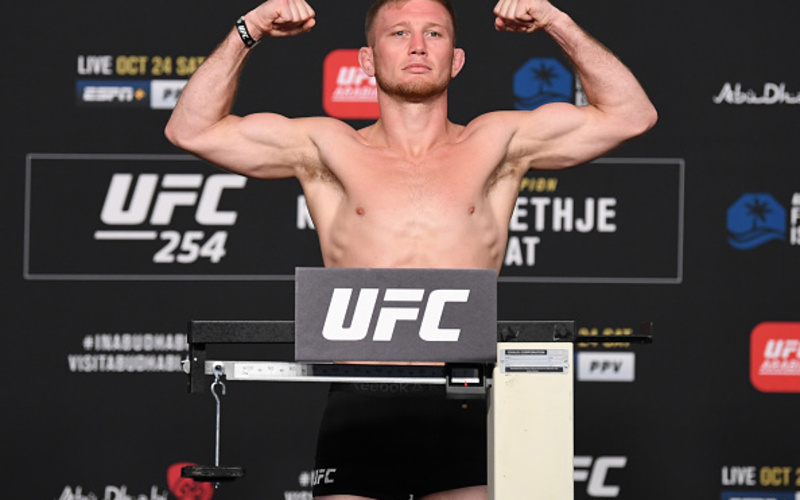 “I feel like this is the exact position I should be in,” he told MMASucka. “I’m looking to capitalize on it, so I’m looking to go out there and put Dominick away in any route possible. You guys have seen me, the last few fights, bringing the heat. I’m not trying to go the full 15 minutes this time.”

Kenney said he was “definitely” a fan of Cruz while growing up and still is.

“His unique style and him as a competitor,” Kenney said. “All of the above. As a commentator and everything. I’m definitely a fan, but that’s going to be put to the side for March 6. He’s just another guy in front of me in my way for the ultimate goal, which is chasing a belt.”

Cruz’s perseverance through returning from injuries to defeat Dillashaw was particularly impressive to Kenney, though he still believes he’s ready for Cruz’s skill-set.

“The way his whole championship, especially his first one, played off with his injuries and everything, made him who he is,” Kenney said. “To come back in such a big way to capture his belt back. All that puts him as the biggest test of my career. As far as hand-for-hand skills, I think I’ve fought a handful of guys who can match his skills.”

Kenney has found himself on the cusp of the UFC bantamweight rankings. Cruz, however, sits entrenched in them at No. 11. A win over Cruz would allow Kenney to firmly establish himself among bantamweight’s best. Defeating the former champ would mean “everything” to Kenney and his career, he said.

“Top-10, top-5, chasing a belt. My next step is Dominick Cruz, and that’s everything I’ve been working for. It’s a big step for me, and I think I’m ready for it.”

So ready, that Kenney feels he holds the advantage over Cruz in every major area the fight could go.

“Shoot, I think I can out-strike him, out-grapple him and out-fight IQ him,” Kenney said. “I think I am the future of the sport, and Dominick’s going to have to find out the hard way.”

Casey Kenney plans to finish Cruz before the 15 minutes on the clock expire.

Kenney enters the bout as a slight favorite over Cruz; in the ballpark of -125. Cruz can be had at +100.

While Kenney is the betting favorite, fight fans seem to give the edge to the former champion. As of Thursday night, 71 percent of more than 600 users on Tapology predicted Cruz will get the job done.

Kenney said it doesn’t matter to him whether he’s the betting favorite or underdog; though he has a slight preference for the latter.

“I know what I’m bringing to the table,” he said. “I guess I wouldn’t mind being the underdog; people betting on me would make a little bit more money.”

UFC 259 is slated to go down at the UFC APEX in Las Vegas on Saturday, March 6. Dominick Cruz vs. Casey Kenney is slated to headline the preliminary portion of the card, which will air on ESPN.