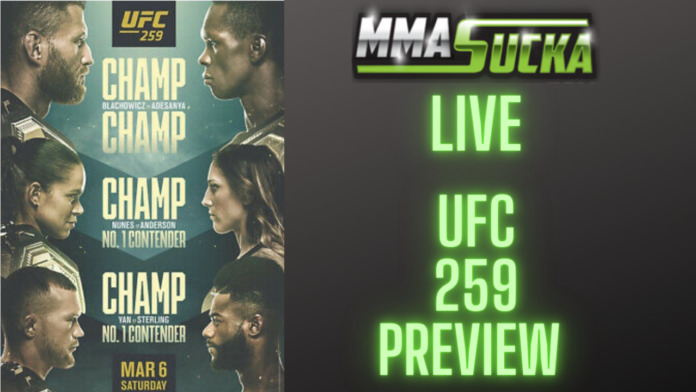 MMASucka Live is back and we are covering the giant UFC 259 fight card on this episode.

Hosts Dan Rose and Jeremy Brand kick things off with some news from around the world of MMA, including the release of former UFC heavyweight champion Junior dos Santos and perennial contender Alistair Overeem from the promotion.

They then dive deep into the absolutely stacked UFC 259 fight card. Including the three title fights between Jan Blachowicz and Israel Adesanya, Amanda Nunes and Megan Anderson, as well as Petr Yan and Aljamain Sterling.

We finally go over some of the top stories over at MMASucka.com.

You can catch all the UFC 259 action on ESPN+ on Amazon Fire, Apple, Android, Chromecast, PS4/PS5, Roku and Xbox One, as well as a number of smart TVs.