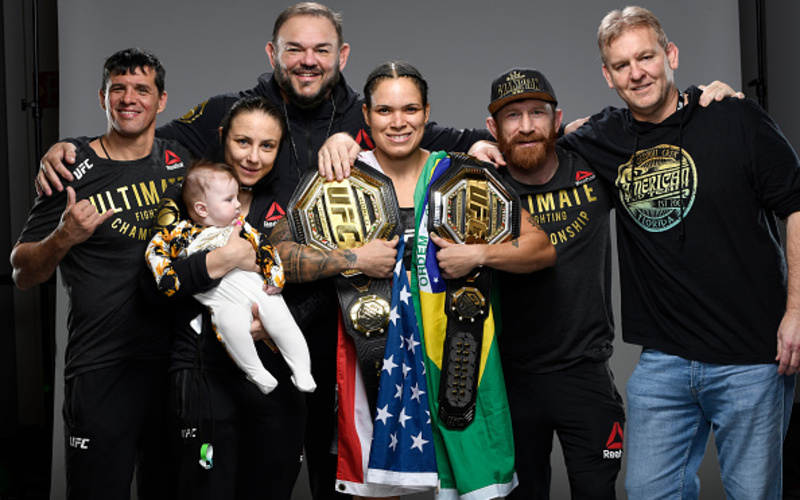 UFC 259 is a memory at this point, and it was an incredible night of fights. The event was highlighted by three title fights and one very crazy title change. In the bantamweight title fight, Petr Yan delivered an illegal knee to Aljamain Sterling and the referee stated it was intentional. Thus, when Sterling was rightfully unable to continue, Yan was disqualified and Sterling was announced the new champion.

Amanda Nunes is simply on a level all her own. We are blessed by being able to watch her compete in her prime. She defended her featherweight championship Saturday night against the talented Megan Anderson but it wasn’t close. It never is. She is simply an amazingly talented fighter. It was great to see her in the cage with her wife, fellow UFC competitor Nina Ansaroff and their baby.

I don’t see anyone able to compete with her at featherweight and I don’t see her losing a fight at Bantamweight either. She’s what they tried to make Ronda Rousey, a once-in-a-generation talent who is dominant and fan-friendly.

Embed from Getty ImagesPetr Yan and Aljamain Sterling were in the midst of competing for the bantamweight title when Petr Yan did the unthinkable. With Sterling clearly down on the mat, Yan delivered a devastating illegal knee to the face that most certainly concussed Sterling.

What’s more, Khabib Nurmagomedov stated that he heard Yan ask the corner if he should strike the downed opponent and they told him to do it. Hopefully, it was simply a misunderstanding and not something Yan’s corner did on purpose. Yan didn’t handle the situation well, and Dana White said the UFC would run it back as soon as possible.

This one was truly ugly. During the fight between Tim Elliott and Jordan Espinosa, Tim Elliott was heard while smothering Espinosa calling him a “Women Beater.” The conversation, mid-mauling went something like this.

Elliott: “You choked a woman in 2018. You’re a woman beater, you f*cking woman beater. She messaged me.”

Espinosa: “Did she? It’s better to know the whole story.”

“We will not be commenting on Tim Elliott’s accusations. It is extremely unfortunate that an athlete who has no information of the situation is given a platform to recklessly slander another athlete with no credible information other than a (Facebook) message. It sets a dangerous precedent allowing this type of behavior to make headlines. Words matter.”

It’s not a good look for anyone involved. After the fight, Tim Elliott admitted he didn’t know the full story and had no intention of being picked up by a live mic. He said his intention was to speak only to Espinosa.