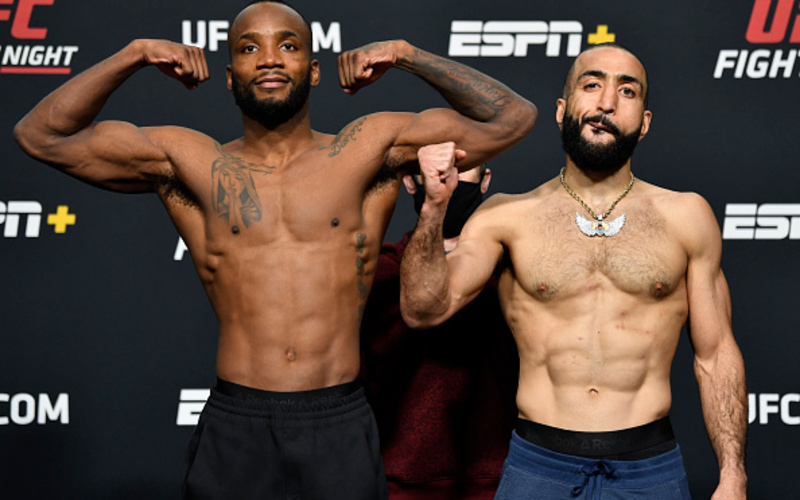 After nearly two years away from the octagon, Leon Edwards is back as he faces off against Belal Muhammad as MMASucka provides UFC Vegas 21 results throughout the card. Edwards was initially scheduled to face Khamzat Chimaev on this card, however, he withdrew with medical issues, prompting Muhammad to step in.

The last time Edwards made an appearance was in July 2019 when he faced off against former lightweight champion Rafael dos Anjos. Edwards went on to defeat dos Anjos that night by unanimous decision for his eighth straight win. Prior to that win, Edwards put together two other notable decision victories over Donald Cerrone and Gunnar Nelson. Sitting at number three in the welterweight division, Edwards hopes a ninth straight win will earn him a title shot with the man that beat him last, Kamaru Usman.

As for Muhammad, he has earned the biggest opportunity of his career with a big fight against Edwards. Sitting at number thirteen, Muhammad has a chance to make a huge jump in the welterweight rankings if he can win. Entering UFC Vegas 21, Muhammad has won his last four straight fights. Among those were three decision wins and a submission finish over Takashi Sato. The decision wins came over notable opponents in Curtis Millender, Lyman Good, and most recently, Dhiego Lima.

After suffering a TKO loss to Johnny Walker in 2019, Cirkunov bounced back with a submission win over Jimmy Crute about six months later. Due to injuries, Cirkunov has been out of competition since then, forcing his bout with Spann to be rescheduled once before.

Meanwhile, Spann was recently undefeated in the UFC, winning his first four straight fights. The last of those was a split decision win over Sam Alvey last May. He would suffer his first loss in the UFC four months later, losing to Johnny Walker by knockout.

Finally, before the co-main event will be a featherweight fight between Dan Ige and Gavin Tucker. Ige looks to bounce back as he recently had his six-fight losing streak snapped. Meanwhile, Tucker will be looking to pick up his fourth straight win and crack the top fifteen.

Follow along with MMASucka as we provide you with UFC Vegas 21 results throughout the card.