The Francis Ngannou Life Story, In His Own Words 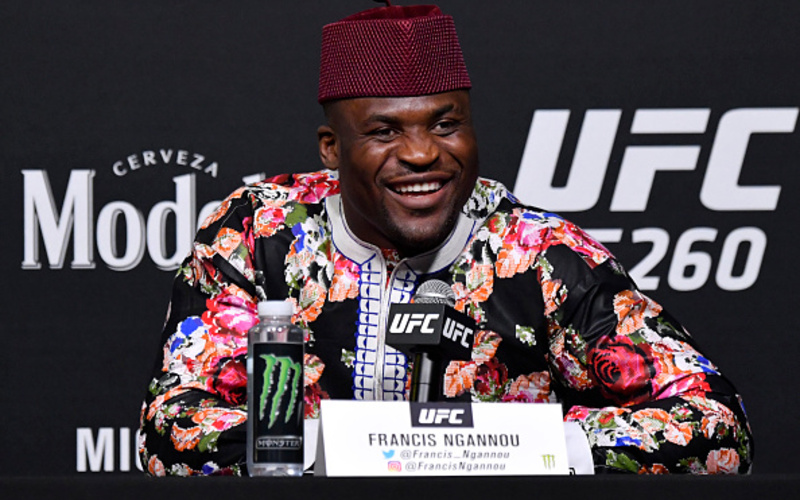 “I hated this place growing up…I hated the sand mine, everything, I hated my life…Sometimes you’d argue with a rat in the trash…It really hurts me to remember everything where I came from…”

This weekend, at UFC 260, the Cameroonian heavyweight Francis Ngannou will have a chance to become the UFC heavyweight champion and avenge his loss to Stipe Miocic. But first we must reflect and look back on what made Ngannou who he is and how he built his character. He came from great poverty in Cameroon, nearly died traveling in Africa, and was homeless in France before rebuilding his life, and then elevating those around him. Listen to the Francis Ngannou life story, in his own words.

Cameroon & the Sand Mine

“It kind of like it really hurts me to remember everything where I came from.”

“I’m from Cameroon, from some small village, and people there are very hopeless. Because they lose everything, nothing is made for them, they’re forgotten…We didn’t have TV’s, you know, we barely have a lamp to read a book. I started to work at 10 years old. That’s how I grew up.”

“I hated these places growing up. You can’t imagine, I hated the sand mine, everything, I hated my life.”

“I was about 10 years old when I started [working in a sand mine] because I was in the village where I grew up. After leaving my Aunt’s house, I went to my grandma and we had to do something. We had to work to contribute at home to buy oil, to buy food and also for our scholarship, for our books. You have to work, even though that work was meant for adults, but we didn’t have any options so we take what we had at the time.”

“I didn’t like my life, and I always felt like I missed my childhood…” Francis Ngannou told Joe Rogan on The Joe Rogan Experience last month, “I had to work by that age and it wasn’t enough. When school started I got to go to school and most of the time still didn’t have a pen to take notes or a notebook to write on it. Sometimes no shoes or clothes, my uniform was tear all over and I was frustrated to look around and see other kids looking good…”

“You work sometimes and they don’t pay you right away. It’s maybe after months and sometimes they’ll just kick you out of the school because of the scholarship fee you have if you haven’t paid on time.”

“Nobody ever understands what my dream was. I just have to change the situation. I just have to be something else. I believe that I can make my own destiny. Nobody says that it will be easy but it’s still possible.”

“I was a dreamer, I was very ambitious. I’m like I want this. [My family would say] ‘You are not that class of life. You don’t belong to that class, and you can’t do it.’ I’m like, why? Why? ‘You have to be a farmer like your dad, you have to do this like your grandpa.’”

“Basically, when I came up with my dream to become a boxer, they’re like, ‘what the fuck is that? How is that possible for you? Look at you, look at where you came from.’”

“Before I left Cameroon I went see my see my mom. I stayed with my mom for like three weeks. She didn’t know why I was there for that long, but I was there because that was the last time before I left and I didn’t know how… it’s going to turn out,” Says Francis Ngannou, “How I’ll end up out there because people die. You don’t know what’s gonna happen. Then I’m like looking at staring at my mom … I was thinking maybe this might be the last time that I’m seeing her.”

“When many people leave their country they don’t know what they’re looking for. It’s difficult because you don’t know exactly where you’re going. You’re walking in absolute dark.”

“My journey from Cameroon to Morocco was about one year, and one year in illegal situations, crossing borders, living in the bush, finding food in the trash, living this terrible life.”

“You would have to go to the market at night time to go find food in the trash. Sometimes you’d argue with a rat in the trash – ‘Get away from this tomato, it’s mine, this rotten tomato is mine, not yours’.”

Francis Ngannou revealed more of his life story on Twitter this past June: “2013: 7 years ago we were freed by Spanish homeland security after spending 2 months in jail for illegally entering Europe by sea. This, after attempting to live for one year from Morocco. I had nothing back then but a dream and a faith of pursuing it. Some people will always tell you that it’s too late, that you can’t make it, that it’s not meant for you, that you’re not worth it, or that you can’t succeed without them while their lives aren’t an example of success. Those voices are always around the corner to make you quit your dream and maybe your destiny. It’s up to you and only you if you let them get to your mind, but you can also reject or ignore the negativities around you and make it in your own way.”

“It’s very difficult when you arrive at a place like Paris, and you don’t have anyone. At the time I didn’t even have a place to sleep. I didn’t have anything. But I didn’t care about that because I’m happy. I was happy because I knew this was an opportunity for me to make something by myself and to progress.”

“I was homeless then, but at that moment, it wasn’t difficult for me anymore. You might think being homeless in Paris in the fall when it’s cold was not great, but the enthusiasm that I had at that time… Beyond everything, I was happy to be in the land of opportunity. I was happy to have my own life and be able to chase my own dreams. So that’s definitely one of the happiest moments of my life.”

“Even though I was sleeping in parking lots and I didn’t have food or money, I was just free. Compared to where I was in Morocco, a parking lot was like a five-star hotel.”

“Yes,” Francis Ngannou told Mike Tyson, “When I went in France it was very interesting to see people complaining about everything. Here was free. You can find a peaceful place to eat for free, and for me this was heaven. I was homeless at the time, but I think that this was the one of the best moment in my life. I was somewhere that I cannot care about being sick, or what to eat, for the first time in my life.”

“In France, I walk to the team, I tell them right away I was honest with them, I’m like, ‘Look guys, I really want to do this but I don’t have no money even no clothes nothing no place to sleep but I just want somewhere that I can train’.”

Francis Ngannou had dreams of being a boxer, but had never seen MMA in his entire life and never stepped foot in a gym. “Until I went in France, like in 2013, that was my first time then I walked to the gym. I was homeless at the time because I didn’t have no money.”

“It took me almost 10 years [from the time I set my goal] to step foot in a gym for the very first time, but I always believed it would happen.”

His coaches sat him down to discuss starting MMA, “If you need the faster you have to do MMA. Then I’m like, what’s MMA? What’s mixed martial arts? What does that mean? They explain to me all those things, then I’m like no man, I don’t want to do that sh*t. I just want to do boxing. You know, the Mike Tyson boxing…To be honest, I never, I didn’t know UFC at the time, I didn’t know what was UFC.”

“Then my next fight I get paid like two thousand Euro. It was a tournament. Two thousand Euro! Wow, that was my first money in Europe. I call Africa, I’m like ‘Hey mom, you have to celebrate this, because it’s March 8th you can have a special international women day. Your son is out here, and take out to dinner’.”

Building the Next Generation

With a successful UFC record of 10-2 in the UFC, Francis Ngannou is looking to share his success, and elevate those at home.

“I want to give some opportunity for children like me who dream of this sport and don’t have an opportunity like me,” Ngannou told MMA Junkie as a prospect in 2016. “The last time I was in Cameroon, I brought a lot of materials for boxing and MMA to open a gym. Now I just bought a big space to start the gym, as well.”

“I still remember when I was young, I was like, ‘Why can’t someone just make a boxing gym here? Today, it seems normal in my village if a kid says, ‘I’m going to do boxing.’ They say, ‘Yes, it is possible, because Francis did it.’

“A lot of children now in Cameroon, because of me, they have a dream. They say, ‘I will be a champion in MMA. I will do boxing like Francis,’ because they saw me when I was young. I didn’t have anything. I didn’t have any opportunity. And today, they see me, and they are dreaming. They are thinking that something is possible. Even when they are so poor, something is possible in life… It’s not easy. It’s so hard, but it’s possible.”

Ngannou has won his last four bouts by first round knockout. He lost his first title attempt to Stipe Miocic in January 2018. After telling the Francis Ngannou life story, he has a chance to avenge his earlier loss. This weekend at UFC 260 he gets a second chance to accomplish his dreams.

“I used to dream big, and now the opportunities to fulfill my dreams are coming quickly. My goal now is to be the heavyweight champion.”