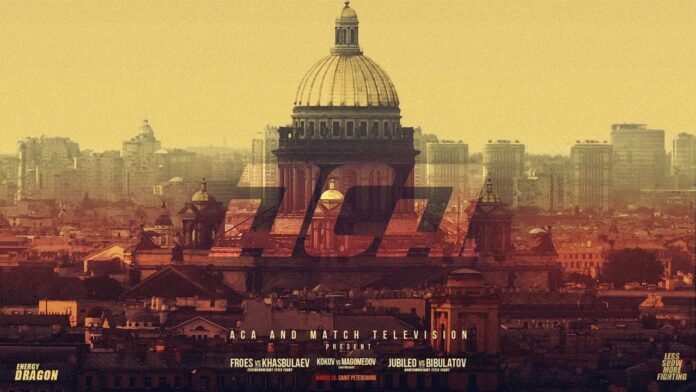 Featured on ACA 120, we will see the ACA Featherweight Championship on the line in the main event when Brazilian born Felipe Froes (19-4) face off against Russian top contender Magomedrasul Khasbulaev (32-8). The reigning champion Froes has won more than 40% of his fights via KO/TKO. Top contender Khasbulaev is a Combat Sambo world champion and was Bellator Featherweight Tournament Champion.

Update: Froes vs. Khasbulaev was moved to the co-main because Froes had missed weight, and was stripped Featherweight of the title. Khasbulaev can win the vacant Featherweight championship but not Froes. Bibulatov vs. Almeida is now the Main Event.

The co-main event will feature the ACA Bantamweight Championship between Brazilian champion Deivi Daniel Oliveira de Almeida (28-6) against Magomed Bibulatov (17-2). Almeida is currently on an eight fight win streak, he will be looking to make it 9 when he defends his title. He has won 10 of his fight via KO/TKO and 11 fight via submission. Russian contender Bibulatov is an ACB Bantamweight Grand Prix winner, WCFA Flyweight Grand Prix winner, and won the inaugural WSOF/PFL Flyweight Championship.

This card will also feature MMA veteran Diego Brandão (25-15) versus Russian Salman Zhamaldaev (18-2). Also, facing each other will be Russian Salimgerey Rasulov (19-7) against Estonian-born Denis Smoldarev (15-7) in a heavyweight tilt. Kicking off the main card will be lightweight Russians Mukhamed Kokov (16-5) versus Rashid Magomedov (24-5-1).

Salman Zhamaldaev def. Diego Brandão via Disqualification in 1:05 of Round 2. Brandão landed an illegal head kick to a grounded opponent.

Salimgerey Rasulov def. Denis Smoldarev via TKO (Punches) in 2:33 of Round 2

Amirkhan Guliev def. Dmitriy Krivulets via Submission (Ankle Lock) in 1:48 of Round 1