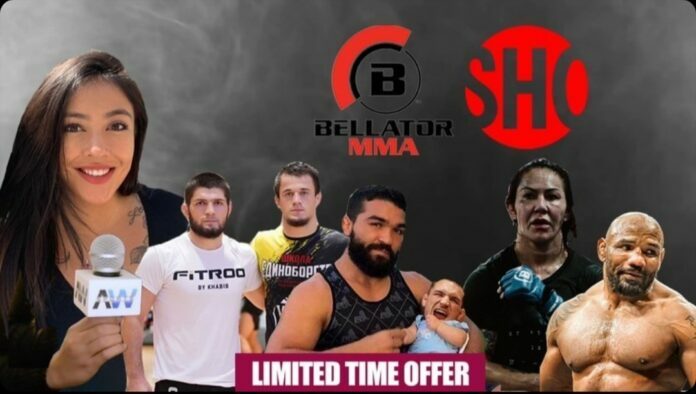 Bellator has come a long way since its birth in 2008. Over a decade of trials and tribulations later, Bellator has proudly put together their best roster yet. It is no longer just the home of washed up fighters before retirement. Bellator has built itself from the ground up– finding breakout fighters that MMA casuals need to get to know… And what better time to start following Bellator than when it partners with a PREMIERE television network like Showtime?

Why 2021 will be Bellator MMA’s biggest year?

The usual rate for a Showtime subscription is $10.99 a month, but for a limited time, fans can catch all the action with a 30-Day Free Trial. Then it’s only $4.99/Month for 6 months. Under the direction of veteran fight promoter Scott Coker, events have been taking place in the Mohegan Sun during the pandemic. It is only a matter of time before traveling restrictions are lifted, allowing the promotion to tour around major cities worldwide.

Along with the Showtime partnership news, Bellator has implemented a ranking system, which will help new fans ease into their soon-to-be acquired fighter knowledge. However, there is no shortage of Bellator coverage when Luke Thomas and Brian Campbell break down everything you need to know on Morning Kombat every Monday, Wednesday, and Friday morning (and that’s not even including bonus content).

The debut of Bellator on Showtime featured the face of the franchise, Patricio Freire, and one of the most underrated fighters in Duke Roufus’ gym: Emmanuel Sanchez. After Pitbull locked in a TKO guillotine win over Sanchez in the first round, it was confirmed who AJ McKee’s next opponent would be.  Trash talk between the undefeated Bellator grassroots fighter, AJ McKee and Pitbull Freire ensued during their heated faceoff. For a deeper dive on the breakdown of the million dollar featherweight tournament, check out The Road to Bellator: Featherweight Grand Prix video on ShoSport’s YouTube page.

In the meantime, the focus is back on the Light Heavyweight division… The long awaited rematch between Lyota Machida and Ryan Bader is set as the main event for Friday, April 9th on Showtime. CBS’s Luke Thomas and Brian Campbell breakdown what to expect in this 205 pounder tournament in The Road to Bellator: Light Heavyweight Grand Prix video. You don’t want to miss the second of three consecutive weekly Bellator fight cards that will air as part of multi-event distribution deal…  Visit Sho.com/Sports while the limited time deal is still available.