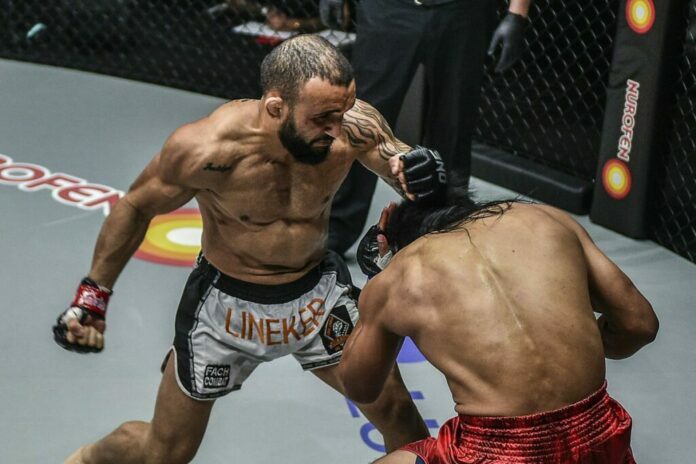 Several past UFC stars have made their way to ONE Championship in the past three years, but not everybody has found success inside the Circle. In fact, yesterday we looked at how those recent transplants have done to see the mixed results.

Ranking UFC Stars in ONE Circle

But how do the UFC stars compare to one another?

Let’s jump right in and take the latest transfers into consideration to see how their ONE careers currently stack up.

With a 2-0 ONE record, John “Hands of Stone” Lineker currently takes the #1 spot and he has a chance to make it 3-0 at ONE on TNT III against American Troy Worthen.

The bantamweight contender made his ONE debut in 2019 against Muin Gafurov and took home a decision win. Upon his return last November, the Brazilian scored a big TKO performance against former ONE World Champion Kevin Belingon.

If Lineker moves past Worthen on Wednesday, April 21, he could be staring a title shot in the eye against Bibiano Fernandes. And that is a matchup everybody would love to see.

Demetrious “Mighty Mouse” Johnson would have been at the very top of this list if he captured the ONE Flyweight World Championship, but he failed to do so as he was knocked out by Adriano “Mikinho” Moraes at ONE on TNT I.

However, prior to the title tilt, “Mighty Mouse” showed his brilliance in ONE competition by capturing the ONE Flyweight World Grand Prix.

Johnson went 3-0 in the tournament and only had a minimal amount of adversity. The Washington native has continued to show why many consider him to the be the greatest mixed martial artist of all-time with impeccable technique.

Johnson will be back, and when he steps into the Circle again he could usurp the top spot.

Heavyweight contender Arjan Bhullar looked strong in his lone ONE bout to date with a unanimous decision win over Mauro Cerilli.

The Canadian-Indian is one of the best wrestlers in the sport today and is a former Commonwealth Games gold medalist. The American Kickboxing Academy star could make a move to the top of the list if he keeps his streak going.

As one of the top contenders, Bhullar has his sights set on Brandon “The Truth” Vera and the ONE Heavyweight World Championship.

The Japanese star began his tenure on a two-bout losing skid. He lost in his debut to future divisional king Kiamrian “Brazen” Abbasov by TKO and then dropped a decision to American James Nakashima.

But the welterweight got his first ONE win at ONE: Century against Agilan Thani by split decision. The Japanese legend still has something left in the tank and remains a strong grappler to contend with for anyone in the division.

Former UFC stars in ONE Championship

Eddie “The Underground King” Alvarez has a 1-2 record inside ONE’s Circle which puts him in the #5 spot.

In his debut, Alvarez was stunned by Timofey Nastyukhin and knocked out in the first round. His return performance against Eduard Folayang got off to a rocky start as well, but the Philadelphian rebounded with a comeback rear-naked choke showing.

Alvarez could have found himself toward the top of this list if things had gone a bit different at ONE on TNT I, but he was disqualified early in the first round for shots to the back of the head. Still, Alvarez can put himself back in prime position when he returns. The door is not closed for the American who remains one of the most talented and dangerous lightweights in the world.

“Super” Sage Northcutt is currently 0-1 in ONE.

The Texan’s lone bout was against one of the premiere strikers in the world, Cosmo Alexandre, and Northcutt found out what kind of power he has in his hands.

The bout was quick and decisive. Alexandre knocked Northcutt out in the first round and the KO is still being played on the ONE highlight reel. But Northcutt has time to redeem himself. The talented Texan will be making the drop down to lightweight, his more natural division, where he could make an immediate impact when he returns in 2021.

Daichi Abe’s ONE career did not go as he would have hoped. The Japanese athlete went 0-2 with his last ONE contest happening in July of 2019.

He was finished in both bouts. Abe was stopped by a body kick against Luis Santos and then via submission to Ev Ting.

Perhaps making matters even worse, Abe’s ONE debut against Santos lasted just 33 seconds. The showings inside the Circle made it difficult for Abe to take-up any spot other than the bottom.

How will the UFC stars continue to fare in the ONE circle?