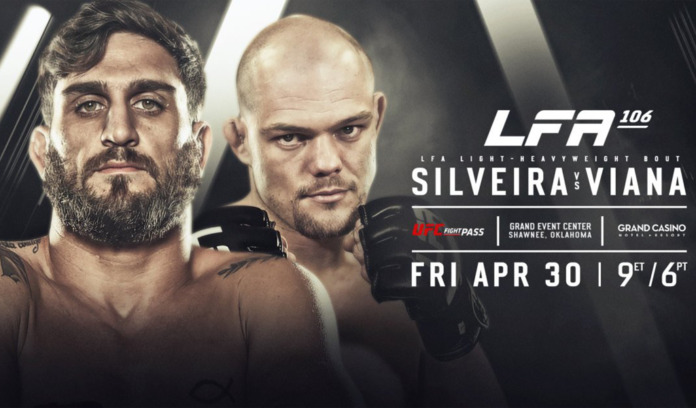 LFA 106 kicks off on Friday, April 30 from the Grand Hotel Casino & Resort in Shawnee, Oklahoma. The seven-bout fight card features a main light-heavyweight event between Joshua Silveira and Rafael Viana.

In the main event, 28-year-old Joshua Silveira fights Rafael Viana. The son of American Top Team founder Marcus “Conan” Silveira, Joshua holds a 4-0 record, winning all his fights by stoppage since his 2019 professional debut. Three stoppages came by way of submission. The fourth was a head kick KO against Cody Rolling.

The 36-year-old Viana hasn’t fought in MMA since his 2016 TKO loss against Devin Clark. The loss happened in RFA, earning Viana his first career loss. Viana wants to prove to the MMA world that he still has the juice, but it’s hard to tell what to expect from a fighter who hasn’t fought in nearly five years.

Edwin Chavez fights Cheydon Leialoha in the featherweight bout. Chavez missed weight by two pounds at the official weigh-in, resulting in a cut of the percentage of his purse. The 27-year-old Leialoha has fought in Bellator and on Dana White’s Contender Series. This is his first fight since 2019. Chavez has a 4-0 professional record.

Trevor Wallace takes on Bubba Grant in the Heavyweight bout. Wallace has won all four of his professional bouts by way of knockout since turning pro in 2020. Grant hasn’t fought since 2019 but earns rank as a regional fight veteran with a solid fight record.

Who ya got for each bout? Tell us in the comments! Be sure to follow me on Twitter @AmandaG_LWOS for the latest in LFA and MMA news.