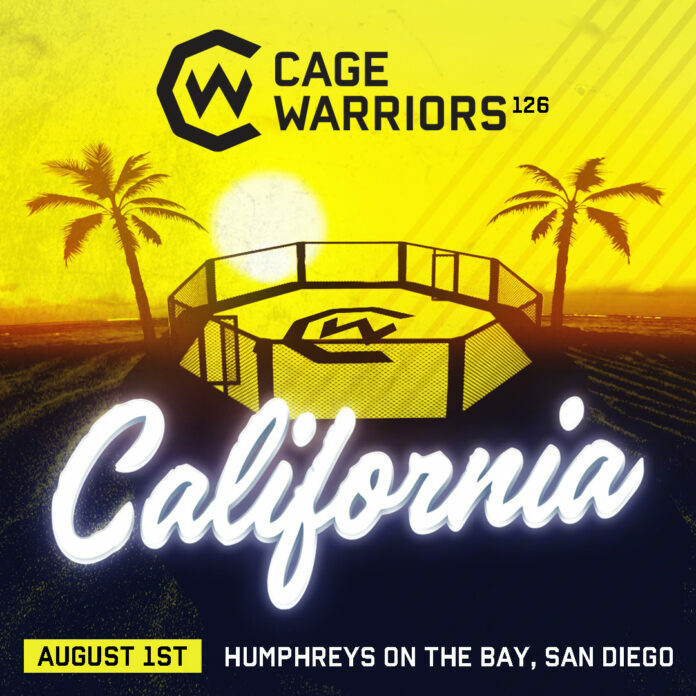 Cage Warriors is based out of London, England, but the promotion just announced that they will be making the trek stateside.

Cage Warriors 126 will take place at Humphrey’s by the Bay in San Diego, California, bringing a stacked professional card, as well as a UFC fighter meet and greet for those fans in attendance.

With this groundbreaking event coming in a time of great uncertainty, Cage Warriors president Graham Boylan said: “It was set in stone in August 2020 that this would be happening,” and also mentioned; “Cage Warriors have done a couple of shows in the US with the company’s previous owners, but myself and the rest of the team are excited to return to the states and put on regular shows for the fans and fighters.

“It’s been a challenge and life is all about the challenges, no one sees what the team & I go through to make these events happen.

“Come fight week, my head will be firmly on the next challenge I set for the team, all we have to concentrate on is getting the event to fight week.”

For the first time in Cage Warriors’ 19 year history, MMA fans in California will be able to experience a Cage Warriors event and the unique atmosphere that comes with it.

“Cage Warriors is a different animal.” say’s Graham Boylan;  “I’ve seen first hand over 12 years, experienced coaches and fighters struggle with the speed and intensity of the show.

“It’s fast, once the show starts the intensity just rises for everyone in attendance.

“What will be great for the US fans to experience is what we do at a live show that wouldn’t be seen on the broadcast, from the lighting display to the “Thunderstruck” countdown crashing on to live TV.

“The intensity is real.

“Cage Warriors has fans around the world and the US is our second-biggest market, so I’m happy the hardcore fans now get the chance to see it live.

“The main thing is that it’s a fun show, it’s a high-end party, dress-up fun atmosphere. It’s the cool show and it delivers.

With San Diego’s strong MMA scene, the city is the perfect venue for Cage Warrior’s first show in the USA, with Graham Boylan commenting: “There is a lot of talent here in So Cal but no big exposure shows for them to be seen on.”

Graham Boylan has also confirmed that more US shows will be on the cards, stating: “We’ll do four, five, six shows in So Cal and pop into a few new states also.”

Fans can expect ticket news and confirmation of the UFC stars in attendance for the fan meet and greet in due course.

Keep it locked to MMASucka.com for more on Cage Warriors 126 and their California show.