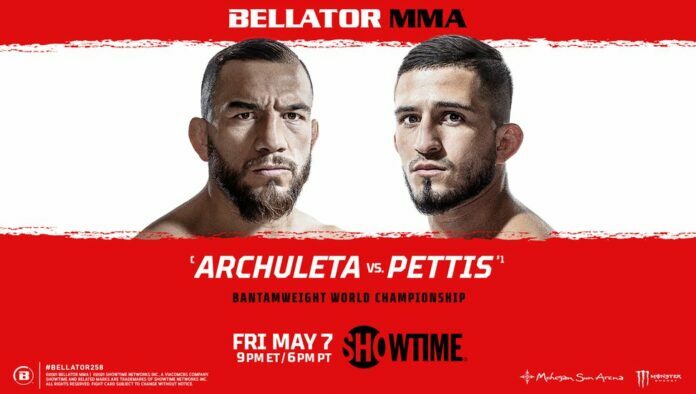 Bellator 258 brings a stacked card of mixed martial arts action on Friday, May 7, 2021. The event takes place from the Mohegan Sun in Uncasville, Connecticut.

Juan Archuleta looks to defend his Bantamweight championship as he faces Sergio Pettis in the main event. Anthony Johnson returns to MMA action when he meets Jose Augusto Azevedao in the co-main event.

The younger brother of Anthony Pettis, Sergio looks to follow in his brother’s footsteps and become a champion in the sport. Juan Archuleta looks to defend his bantamweight championship against Pettis. This bout will be the first time Archuleta attempts to defend his 135-pound gold.
Pettis (2-0 BMMA; 25-2 MMA) defeated Ricky Bandejas by unanimous decision at Bellator 242 in July 2020 in his last match.
Archuleta (7-1 BMMA; 25-2 MMA) defeated Patrick Mix by way of decision in his last Bellator fight in November 2020.
Both men come into the fight on win streaks.

Get ready to rumble!
Anthony Johnson makes his Bellator promotion debut as he returns to action after a four-year hiatus. He meets Jose Augusto Azevedo in the co-main event in the quarter-finals of the Light-Heavyweight Grand Prix.
Azevedo (7-1 MMA; 1-0 BMMA) won his Bellator MMA debut against Johnathan Wilson just over one month ago at Bellator 255.
Johnson (22-6 MMA; 0-0 BMMA) fought last in the UFC in 2017. In this match-up, Daniel Cormier submitted him in round 2 of the bout. Johnson won his previous three fights by way of KO, defeating Jimi Manuwa, Ryan Bader and Glover Teixeira.
Fans were disappointed to learn that Yoel Romero, Johnson’s original opponent, was forced out of the bout after he failed to clear a medical screening. The bout promised some of the most exciting MMA action of the year.
Johnson has tons of power that could earn him a victory in the fight, but if Azevedo can get him on the ground, the fight may go in his favor. Johnson has proven time and time again that he lacks submission skills and has an unreliable gas tank.

Patricky “Pittbull” Freire (23-9 MMA; 16-8 BMMA) faces Peter Queally (12-5-1 MMA; 1-1 BMMA) in a lightweight match-up. Queally stopped Ryan Scope at Bellator 227 in September 2019. After the upcoming fight announcement, Queally told reports “cartoon level violence is anticipated.”
Freire lost in the finals of the Rizin Lightweight Grand Prix to Tofiq Musayev. This ended his seven-fight win streak. Freire told reporters after the fight announcement that he would “fight a guy who deserves a big beating.”
These two men practically hate each other and will bring the pain until the fight is over.

In the final main card bout, Michael Page (18-1 MMA; 14-1 BMMA) meets Derek Anderson (17-3 MMA; 8-3 BMMA.) Page has only lost once in his career and is currently riding a four-fight winning streak. Most recently “Venum” defeated Ross Houston in October 2020. Anderson defeated Killys Mota in November 2020 in his last fight. Another promising fight for fans.
That was our Bellator 258 preview. Let us know what fight you’re looking forward to most.