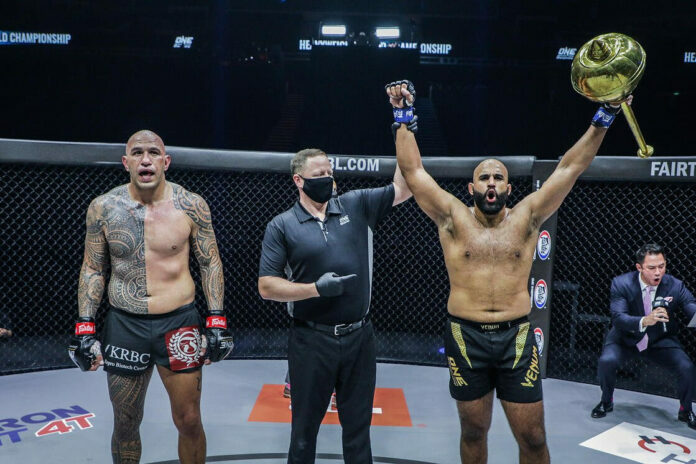 ONE: Dangal gave fans a sampling of everything with its five bouts. ONE Championship’s string of stellar events continued with a highlight-reel knockout and stunning submission coming out of the card, but nothing topped India receiving its first World Champion.

3 Things We Learned at ONE: Dangal

The action went down on Saturday, May 15, and Arjan “Singh” Bhullar exited wearing the ONE Heavyweight World Championship.

What else did we learn from the action at ONE: Dangal? Here are three things to be taken away from another memorable event.

Arjan “Singh” Bhullar accomplished his mission to become India’s first-ever mixed martial arts World Champion. He did so by not allowing Brandon “The Truth” Vera to implement his typical game.

Vera was constantly on his back foot as Bhullar pressed forward. Keeping Vera guessing with feints and the threat of a takedown, the Canadian-Indian also found success with his fists. In the second round, he wobbled the defending champ and turned up the heat even more.

Once Vera was beneath him, the American Kickboxing Academy had the match wrapped up. Vera had nowhere to go, and Bhullar’s superior wrestling allowed him to keep the position while firing off repeated ground and pound.

India has a rich wrestling culture, and the growth potential for future athletes is immense. Having Bhullar represent the nation and stand atop the mountain of ONE will do massive things for martial arts in the country. This is a landmark moment for Indian mixed martial arts, and Bhullar is an excellent representative to have leading the charge.

Miura Is A Wizard

When Ayaka Miura steps into the ONE Circle, her opponents know she will try to take them to the ground and submit them. They also know her submission of choice is a scarf-hold armlock. Yet, they cannot seem to stop her from doing it.

Rayane Bastos became the latest victim at ONE: Dangal.

Miura reinserted herself into the title pictures at atomweight and strawweight, but most impressive is the submission itself. It’s not a rear-naked choke or guillotine. It’s not something ordinary. It’s something specific and rare. That makes it special and worth noting.

To have that happen in succession, her fourth submission by scarf-hold armlock in ONE is incredible. Thus far, only Tiffany Teo has managed to avoid being tapped out by the technique. As she continues to pile up submissions, Miura is etching her name in the history books.

The ONE Atomweight World Grand Prix Will Be Insane

The ONE Atomweight World Grand Prix has not even begun, and we already have our first upset of the tournament. Although not an official entry into the tournament, Bi “Killer Bee” Nguyen eliminated Ritu “The Indian Tigress” Phogat at ONE: Dangal.

Phogat was slated to battle Meng Bo in the quarterfinals at ONE: Empower. However, she accepted the challenge of Nguyen for this event, and after a split decision loss, she will not get the chance to compete in the ONE Atomweight World Grand Prix.

Accepting the risk was commendable, but it did not pay off. Instead, Nguyen becomes the first athlete to topple the Indian inside the Circle and shakes up the tournament.