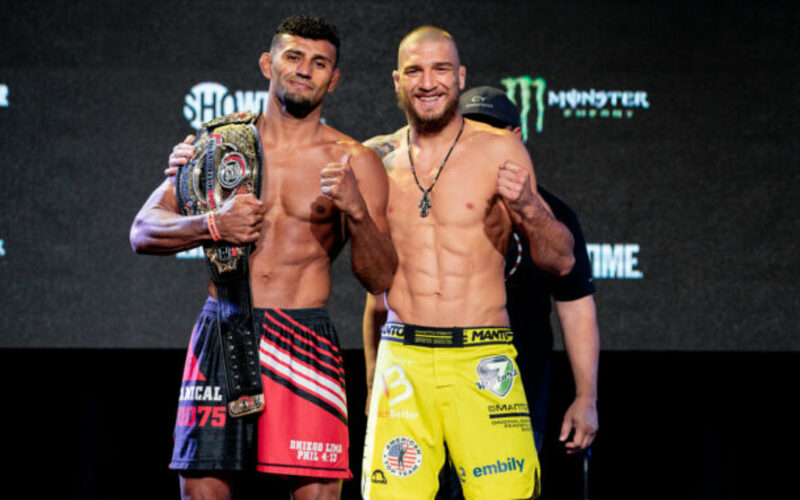 Bellator 260 returns tonight with a stacked card featuring a six-card prelim card and a five-bout main card at at the Mohegan Sun Arena in Uncasville, CT.

MMA Sucka has you covered for all the results throughout the whole card.

In the co-main event, an explosive matchup between welterweight contenders Paul Daley and Jason Jackson is set to co-headline and is expected to produce fireworks.

Rising future contender Aaron Pico will also feature on the card to test his skills against Aiden Lee in a fun, interesting featherweight matchup.

Lots of rising young prospects on the prelims such as Justin Gonzales, Tywan Claxton, Lucas Brennan and Alex Polizzi so be sure to tune in.

Follow along with MMASucka as we provide you with Bellator 260 results throughout the card below.

Aaron Pico def. Aiden Lee via Submission (anaconda choke) at 1:33 of Round 3

Mark Lemminger def. Demarques Jackson via TKO (ground strikes) at 3:30 of Round 2

Lucas Brennan def. Matthew Skibicki via Submission (anaconda choke) at 1:54 of Round 1

Alex Polizzi def. Gustavo Trujillo via Submission (straight armbar) at 4:22 of Round 1

Stay tuned right here at MMA Sucka for more live streams as well as videos highlighting the top fighters, commentators, coaches, promoters, and other names in MMA and combat sports. We also bring you great offers on the latest MMA products and merchandise. You can also subscribe to our YouTube channel for regular updates and all the latest fight news. You can also check out our sister site, at TheFightBuzz.com for the latest from the world of MMA and other combat sports.
Comment on this article
Give us feedback