The main event is preceded by three fights featuring highly-touted prospects looking to showcase their skills once again. The co-main event pits striking specialist and iKON fan favorite Jonny Parsons against a surging Ricardo Chavez. Pete Rodriguez has won each of his three professional MMA fights, all with iKON, by KO/TKO in 85 seconds or less. He will look to continue that streak against Roberto Pixley, who has gone outside the first round only once in his six professional fights so far. Decorated Egyptian wrestler Mahmoud Sebie made his MMA debut in XMMA’s inaugural event in January, where he picked up a quick TKO victory. His sophomore outing comes against Enrique Hernandez, who will be making his professional MMA debut.

Jonny Parsons def. Ricardo Chavez via KO (head kick and punch), 3:26 of Round 2

Pete Rodriguez def. Roberto Pixley via KO (punches), 2:21 of Round 1

Mahmoud Sebie def. Enrique Hernandez via TKO (ground and pound), 1:09 of Round 1 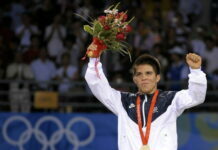