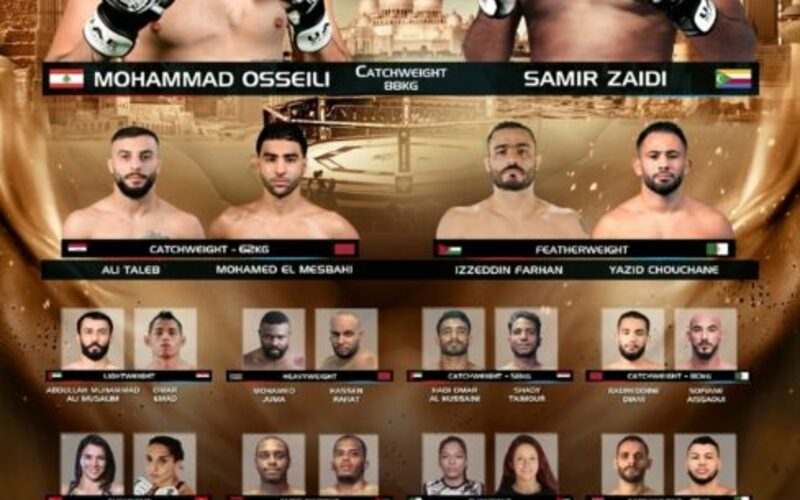 UAE Warriors returns and all your UAE Warriors 19 results will be right here. These are live results updates for UAE Warriors 19: Arabia 3. This event will be broadcast live from the Jiu-Jitsu Arena in Abu Dhabi, United Arab Emirates.

In the main event of UAE Warriors 19, we will see Mohamad Osseili (3-0) defend his unblemished record against Samir Zaidi (5-2). Osseili is born of Lebanon and raised in Dubai, UAE, he has won his last two bouts with UAE Warriors quickly in the first round. Combined his last two wins total two minutes and seventeen seconds. Zaidi, of France, will be fighting hard to get back in the win column and upset the surging Osseili. This fight will be a catchweight at 194 lbs.

In the co-main event, UAE Warriors 19 will have Swedish-born Ali Taleb (3-0) versus Mohamed El Mesbahi (1-0), of Morocco. Both of these fighters are coming off KO/TKO victories. This contest will be another catchweight but at 137 lbs.

Also featured, “The Palestinian Samurai” Izzeddine Al Derbani (10-2) will face off with Yazid Chouchane (7-2) in a featherweight contest [fight cancelled]. Both of these fighters are on a two-fight win streak. Additionally, “Al Bloushi” Abdullah Muhammad Ali Musalim (3-2), of the UAE, will be looking to continue his streak against “The Werewolf” Omar Emad (2-2), of Egypt, in a lightweight tilt. The card is scheduled for 13 MMA bouts, and we have all the UAE Warriors 19 results below.