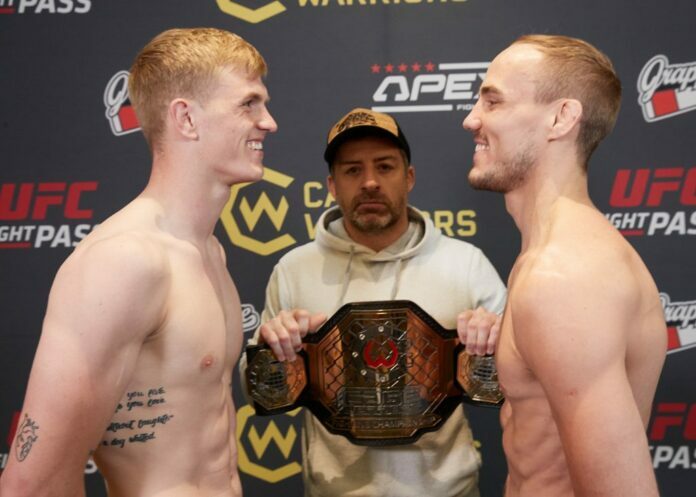 The main event will see a fierce battle for the vacant Cage Warriors welterweight belt between Irish ultra-prospect Ian Garry and the British veteran Jack Grant. Garry is undefeated and on a five-fight finish streak while Grant has challenged for the Cage Warriors lightweight title twice.

The co-main will see a featherweight clash between the Swedish Tobias Harila, who is on a seven-fight win streak with six of those being stoppages, and the Frenchman William Gomis who recently won the 100% Fight featherweight championship.

Also on the card, Decky McAleenan takes on Stevie McIntosh at lightweight while James Hendin locks horns with Paull McBain at featherweight. At a 130 pound catchweight Scott Malone will fight Serdar Altas.

There will be three fights on the prelims as well. Former title challenger Gerado Fanny battles Connor Hignett at flyweight while Scott Pedersen clashes with Marcus Lewis at lightweight. Ciaran Mulholland dukes it out with Connor Wilson at flyweight to round off the card.

Stevie McIntosh def. Decky McAleenan via submission (rear naked choke) at 2:51 of round 2

James Hendin def. Paull McBain via submission (rear naked choke) at 4:23 of round 2

Scott Malone def. Serdar Altas via TKO (ground-and-pound) at 4:09 of round 2

Gerardo Fanny def. Connor Hignett via KO (flying knee) at 4:33 of round 2

Scott Pedersen def. Marcus Lewis via submission (rear naked choke) at 2:16 of round 1

Ciaran Mulholland def. Connor Wilson via submission (guillotine) at 0:44 of round 2