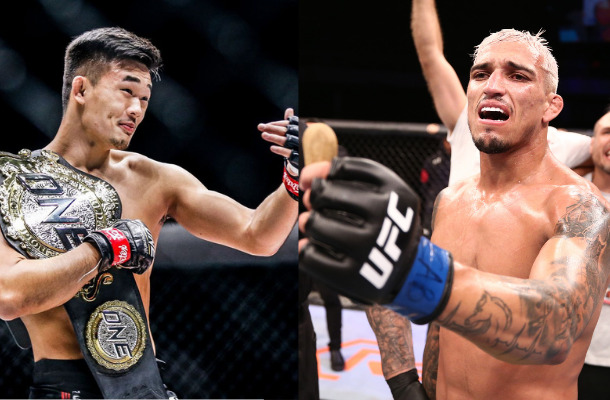 ONE Championship has been vocal about a co-promotion with the UFC from its CEO, Chatri Sityodtong, to its World Champions. They want the chance to prove themselves against the UFC’s best athletes.

ONE vs UFC Matchmaking

As fans, why would we not want to see it happen? That thought process has been the lifeblood of this sport since its first day. The incredible athletes of ONE going head-to-head against the juggernaut of the UFC. The story writes itself.

Here are five cross-promotion matchups we would love to see happen as soon as possible.

Two energetic, well-rounded lightweights going toe-to-toe to see who the best in the world truly is? Sign us up.

Both men have seen incredible runs over the past few years. Charles Oliveira’s ascent toward the gold has been nothing short of exceptional, but Christian Lee’s run through ONE has been his equal. Both men are coming off dazzling knockout finishes.

And it’s not as if this would be the first world-class grappler Lee has battled against. The Hawaii-based athlete won his title from Shinya Aoki, one of the sport’s most legendary submission aces. It makes the potential matchup against Oliveira all the more intriguing.

The length, power, and technique between the two would instantly make it one of the most anticipated bouts in the sport.

American Thanh Le has been vocal about a co-promotion and recently told MMASucka that he would finish the UFC Lightweight Champion, Alexander Volkanovski.

Could that happen? Absolutely.

Le’s journey to the gold has been paved with incredible knockouts. The Louisiana native’s progression as a mixed martial artist is one of the most unheralded in the sport today. His footwork and movement make him an intriguing puzzle to solve.

But puzzles have been solved by the UFC king before. He is coming off three impressive victories over all-time greats Jose Aldo and Max Holloway (twice). Giving him another problem to solve in Le’s game would only serve to make for an exciting collision of featherweights.

Brandon Moreno now sits atop the flyweight world, but ONE strawweight Jarred Brooks would be a sensational opponent for the Mexican champ.

When Brooks was in the UFC, he showed himself well. The American also was involved in one of the most controversial decisions of 2017 when he lost a split decision to future UFC Flyweight Champion Deiveson Figueiredo, where the majority of mixed martial arts experts penned Brooks as the victor (h/t MMA Decisions).

Proven already to be an elite flyweight, Brooks going toe-to-toe with Moreno would serve to be a pivotal contest for both men.

Giving Moreno another top-tier opponent would only help to strengthen his claim as the best, and Brooks would, in turn, have the opportunity to erase the memories of those ill-conceived scorecards and stand where he believes he should already be — at the top.

Battles between World Champions are the easy choice, but sometimes you just want a fantastic slugfest between two warriors who will not back down from any challenge.

That is exactly what you would get if Saygid Guseyn “Dagi” Arslanaliev and Justin Gaethje were to meet.

It would be pure fireworks. Both men are aggressive and come forward, slinging heavy shots. It is precisely the type of matchup that both men crave, and fans leap out of their seats while watching. It is one of the perfect bouts to book in a ONE vs. UFC co-promoted event.

There would be no losers in this match. The fans would get to see one of the wildest and crazy battles with two athletes standing and exchanging on the logo in the center of the canvas. That’s just who they are.

Other considerations should be made for a co-promoted event. And what about Europe? Currently, two of the world’s best light heavyweights hold gold and could easily headline a massive event anywhere on the continent.

Reinier “The Dutch Knight” De Ridder took the ONE Middleweight and Light Heavyweight World Championships from Aung La N Sang and looked dominant while doing it. Meanwhile, Jan Blachowicz has reigned over the UFC division and smothered Israel Adesanya in the process.

Pitting these two bruising light heavyweights against one another would make for a clash of styles that could not be missed. Blachowicz’s heavy hands against De Ridder’s incredible grappling? It’s a perfect match to see who the best light heavyweight in the world is in 2021.

Anywhere in the world, this is a great matchup for the dream event. However, factoring in their stature in Europe, it is an even bigger opportunity for both organizations to give back to the European fanbase and continue its growth with this massive match.

What ONE vs UFC matches would you like to see?