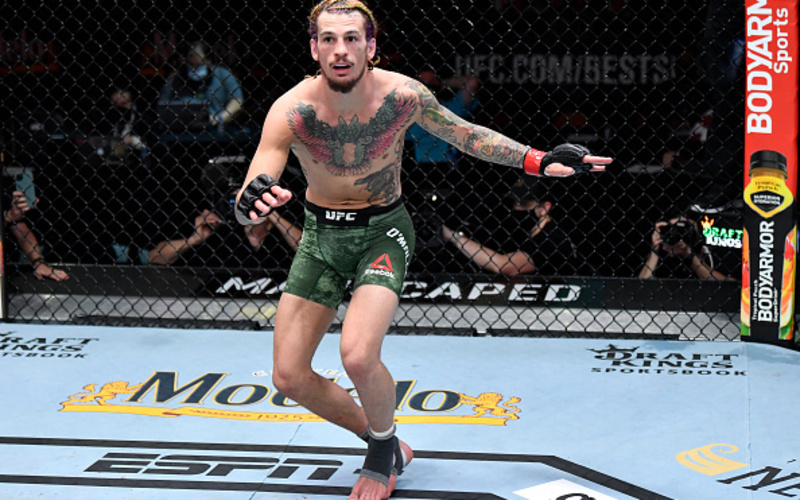 After his initial opponent Louis Smolka withdrew from his bout with Sean O’Malley, “Suga” now meets UFC newcomer Kris Moutinho in the curtain opener at UFC 264.

Headlined by perhaps the biggest fight of the year, “The Notorious” Conor McGregor returns to face Dustin Poirier in a trilogy series that saw each fighter knock out the other in their first two fights with each other. The Dana White Contender Series alum O’Malley will once again be featured on a massive pay-per-view as his last time out was at UFC 260. “Suga” took full advantage of the main card feature spot, and took his time in dismantling Thomas Almeida en route to a knockout victory in round 3.

As aforementioned, Smolka withdrew due to a possible staph infection, so the promotion moved on and dubbed the Cage Fury Fighting Championship veteran Moutinho a shot at O’Malley in his welcome fight into the UFC. The 28-year old is on a two-fight win streak and is fresh considering he just won his last fight in late May. Even though it’s on less than two weeks of notice, the chance to take on one of the UFC‘s golden geese is a gigantic opportunity.

Despite short-notice fears, Moutinho is crafty on the ground and has a toughness that cannot be taught to a fighter. Moutinho highlighted those characteristics in his last fight at CFFC 96, when he submitted Andrew Salas with an arm-triangle choke at the end of the third round. The gas tank of Moutinho should not be underestimated, and nobody denies that O’Malley has a tough task ahead with the mandatory adjustments he will surely have to make for his new opponent.

Bar Sean O’Malley watching for takedowns and submission attempts, he’s certainly in the driver’s seat for UFC 264. Typically, the fighter already in camp is favored in short-notice replacement fights. In addition, O’Malley’s tactical awareness is second to none, and thus his counter striking is some of the most dangerous in the organization. With explosive kicks and constant feints, he is a puzzling striker that will put your lights out if you rest on your laurels for just one second in the fight.

As a rising superstar in the UFC, Sean O’Malley’s personality is ever-present in his fighting performances, at times it seems like the bantamweight is more concerned about the highlight reel KO than the actual results of the fight. However, it seems that mentality is not to his detriment as the rising icon has scored 8 KO/TKOs in his 14-fight professional career. While he took his first loss to Marlon Vera last year, O’Malley bounced back emphatically with the Almeida knockout.

At UFC 264, Sean O’Malley will look to steal the show from the main event but that will take a herculean effort considering the stakes involved at the top of the card. Even so, O’Malley could have his hands full as mystery surrounds Moutinho and what exactly he brings to the cage. With limited information about Moutinho at this point, perhaps that will benefit the UFC debutante when they meet this Saturday on pay-per-view.

Keep it locked on MMASucka for your latest MMA news and we will get you ready for the major UFC 264 event!