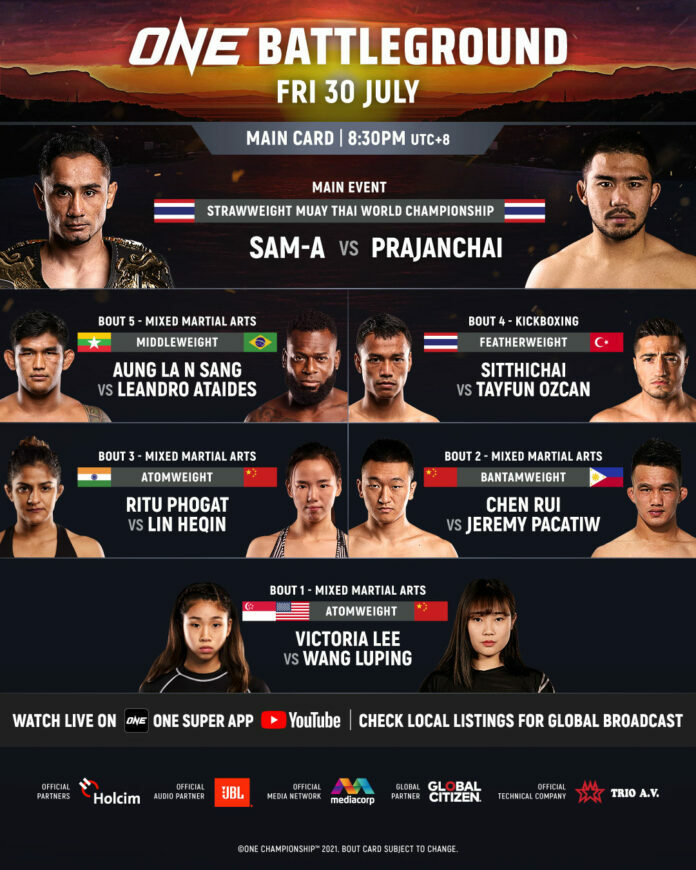 ONE Championship’s second-half will get underway on Friday, July 30, with ONE: Battleground from the Singapore Indoor Stadium.

The six-bout card will feature four mixed martial arts bouts and two ONE Super Series affairs, which include the main event for the ONE Strawweight Muay Thai World Championship. Reigning champion Sam-A Gaiyanghadao will put his gold on the line against Prajanchai PK.Saenchai Muaythaigym.

In the co-main event, former two-division World Champion Aung La N Sang returns to the Circle in an effort to get back in the win column. He will meet the ever-dangerous Leandro Ataides in a middleweight affair.

Both men are vying for rematches against Reinier De Ridder, who stands atop the middleweight and light heavyweight divisions, and each man believes they can knock off the Dutchman if they get the chance.

Also, in action, 17-year-old phenom Victoria Lee returns for her second professional bout. After a successful debut earlier in 2021, the soon-to-be high school senior will meet China’s Wang Luping in an atomweight contest.

Lee, the younger sister of ONE World Champions Angela and Christian, flashed her brilliance in her debut with a dominant ground attack. However, in this meeting, she will be dealing with a power striker in Wang.

The Indian suffered her first defeat at the hands of Bi Nguyen and is hopping right back in the Circle to wash the taste of that bout out of her mouth. The loss removed her from the highly-anticipated ONE Atomweight World Grand Prix as well, which should serve as extra motivation against Leqin.

Bantamweights Chen Rui and Jeremy Pacatiw serve as the final mixed martial arts contest and could be a sleeper for the best bout of the night.

In the other ONE Super Series matchup, featherweight kickboxers Sitthichai Sitsongpeenong and Tayfun Ozcan go toe-to-toe in a three-round affair.