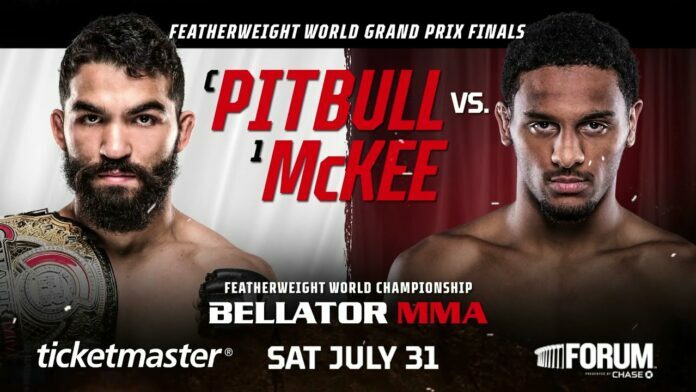 The biggest fight in Bellator history goes down this Saturday at The Forum in Los Angeles, CA where champ-champ Patricio Friere, better known as Pitbull will defend his featherweight crown against the surging no.1 contender AJ McKee.

The two fighters will compete for the prize of $1 million for winning the Bellator Grand Prix tournament which started off with 16 men back in 2019 and will finally conclude this weekend. However, more so than the money, the two are competing for legacy. A win for McKee will establish himself as the pound-for-pound no.1 fighter in Bellator as well as becoming the new featherweight champion whereas, for Pitbull, he will remind everyone why he is the most accomplished and greatest fighter in the promotion by defending his belt for the sixth time.

Pitbull is currently on a seven-fight win streak and set to defend his belt for a consecutive sixth time after fending off the challenges from the likes of Juan Archuleta, Pedro Carvalho and Emmanuel Sanchez. During that time, he also defeated former Bellator lightweight champion Michael Chandler to become a two-weight world champion and solidify himself as one of the greatest fighters in the promotion.

There is a strong argument that Pitbull may be the best featherweight in the world which is rare for someone competing outside the UFC however the record speaks for itself. With a record of 32-4, Pitbull has only had one convincing loss in his whole career with two split decision losses and a leg injury loss against Benson Henderson. He is a two-time featherweight champion and also the lightweight champion after he dispatched Chandler in the first round in 2019. That win has only looked better since, after Chandler has joined the UFC and nearly captured the UFC title himself. Pitbull has won 10 title fights in his career with a total of seven title defences. The 34-year-old is easily the most decorated fighter in the promotion’s history as well as still being the best fighter today.

Currently ranked as the no.1 pound-for-pound fighter Pitbull will face his biggest challenge yet in the form of undefeated phenom McKee who has gone 17-0 in the promotion, the longest winning streak in Bellator history and he’s looked unstoppable doing it ever since he turned professional in 2015. 12 of his 17 wins have come by finish as his rise to the top has been spectacular, to say the least with many believing McKee to be the next big superstar and dominant force.

In the prime of his career, the 26-year-old will do everything in his power this weekend to prove that he is no longer the blue-chip prospect but he is now a top fighter at a world championship level. In the Grand Prix tournament, he defeated the likes of Georgi Karakhanyan, Derek Campos and Darrion Caldwell. All of whom he finished. Now he has a chance at greatness to become the new featherweight champion and the face of the promotion.

Rest Of The Card

In the co-main event at Bellator 263, former UFC fighter and Cage Warriors champion Mads Burnell takes on the veteran and two-time title challenger Emmanuel Sanchez in an important featherweight matchup. Whilst it may not be the title eliminator, a win here for either man will push them closer towards title contention within the likes of Pitbull and McKee.

Also competing on the card is highly touted Usman Nurmagomedov. With a last name like there is always going to be a lot of hype behind the fighter. He is the younger cousin of former UFC lightweight champion Khabib Nurmagomedov as he will look to test his skills against Luis Muro. He made his Bellator debut back in April with a win against Mike Hamel via unanimous decision where he showed off his great striking ability.

Former Bellator lightweight champion Brent Primus also makes his return as he looks to face off against PFL and WSOF veteran Islam Mamedov.