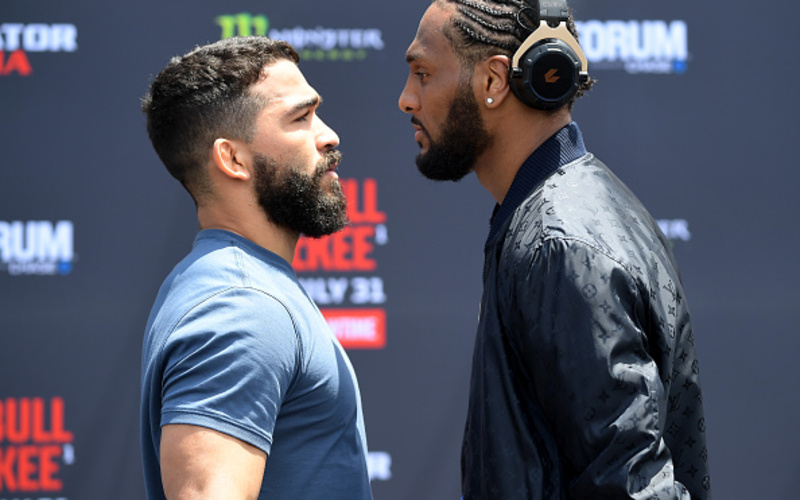 The rematch between the current undefeated Bellator featherweight champion, AJ McKee (18-0) and the former champion Patricio “Pitbull” Freire (32-5) is set for a stacked Bellator card on April 15 at the SAP Center in San Jose. The news was confirmed via a report from The Orange County Register.

We return to San Jose with a 𝖇𝖆𝖓𝖌𝖊𝖗💥!

🎟’s go on sale This Friday on Ticketmaster. #Bellator277 pic.twitter.com/vinnSdL7RL

Freire is one of the greatest Bellator fighters of all time. He was the holder of both the featherweight and lightweight straps before relinquishing the latter so that his brother, Patricky Freire could win it against Peter Queally at Bellator 270. On the other hand, AJ McKee is a second-generation undefeated MMA prodigy who has beaten the likes of Darrion Caldwell, Derek Campos, and Georgi Karakhanyan on the way to his first title bout.

During their first matchup at Bellator 263 last July, McKee was able to wobble Freire with a headkick and finish the fight with a standing guillotine in the first round. That night belonged to McKee as he took home both the featherweight strap and the $1 million dollar Bellator Featherweight World Grandprix prize money. Mckee has teased the idea of moving up to lightweight to become a double champion but it looks like he will have to settle for a grudge match with Freire first at 145lbs. Prior to their last fight, Freire had not lost in five years and was on a seven title fight win streak. It was arguably also the only legitimate finish the Brazilian had suffered outside of the loss that came via leg injury (broken fibula) during a bout against Benson Henderson in 2015.

Bellator 277 is looking to become one of the most stacked cards to date. As the co-main event will feature the finals for the Bellator Light Heavyweight Grandprix in a matchup between the current champion Vadim Nemkov (15-2) and the streaking Corey Anderson (16-5). En route to the finals, Nemkov beat the former champion Phil Davis and Julius Anglickas and extended his current win streak to nine wins. Anderson finished Dovletdzhan Yagshimuradov and the former double champion Ryan Bader on his way to his first Bellator title match. Anderson has not touched gold yet but it’s worthy to note that he has wins over the current and former UFC light heavyweight champions Glover Teixeira and Jan Blachowicz. We will see if Anderson will be able to finally rise to the occasion and capture gold.