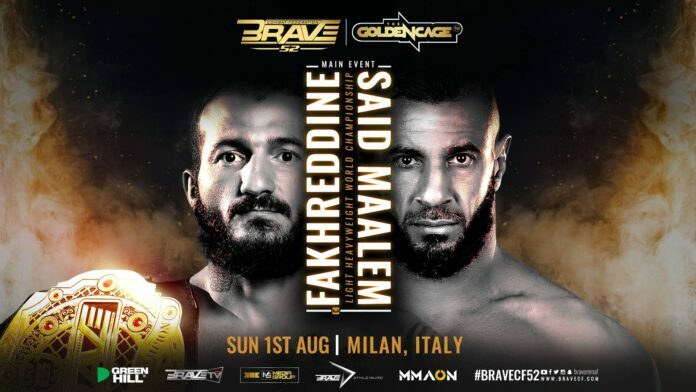 The eight-fight card will take place at noon EST and can be seen on FiteTV. Moving up as the Brave CF middleweight champion, Mohammad Fakhreddine will battle Mohammad Said Maalem for the vacant Brave CF light heavyweight title. The co-main event on the night will feature two rising, young stars as the home nation’s Enrico Cortese battles Russia’s Rustam Chsiev.

Fakhreddine and Said Maalem were supposed to meet Brave CF 50 but Fakhreddine had to pull out due to an illness. After the cancellation, Said Maalem took to social media to insult and humiliate Fakhreddine for pulling out of the fight. He made fun of Fakhreddine’s illness and accused him of being disrespectful. For Fakhreddine, not only can he become Brave CF’s first simultaneous two-division champion, but he can stick it to the man who attempted to humiliate him after their bout fallout.

The current middleweight champion and a competitor under the Brave CF banner since Brave CF 4, Fakhreddine (14-4) returns to action after his fourth-round knockout at Brave CF 41 in September 2020 to earn the middleweight championship. A devastating striker, 11 of Fakhreddine’s 14 career wins have come by KO/TKO. The champion enters this contest on a two-fight winning streak and a third would mean another championship. Across the cage will stand Maalem (11-3) who is currently undefeated in the Brave CF cage and riding a six-fight winning streak. Sporting KO ability as well, five of his 11 wins have come with a knockout finish. The time has come to crown a new champion in this heated dual.

Co-main eventer Enrico Cortese (7-2) could not have had a better start to his Brave CF career, going 2-0 thus far. In his debut, he earned a first-round knockout just two minutes into the contest. That dominant performance came at Brave CF 35 in July 2020, when he was originally slated to face the now middleweight champion. The card is stacked with finishers and Cortese is no exception with six of his seven professional wins coming by a finish. A quick starter, all of those six finishes have come in the first round of action.

Losing his Brave CF debut, Rustam Chsiev (3-2) has won his last two bouts including a first-round stoppage over a tough opponent in Brendan Lesar. “The Russian Bear” is set to face his toughest task to date though in the night’s co-main event. Though he is early in his professional career, Chsiev already has a couple of big third-round TKO finishes under his belt. A win here would help propel him into potential title talks down the road. 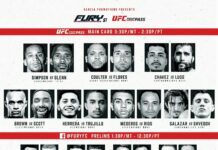