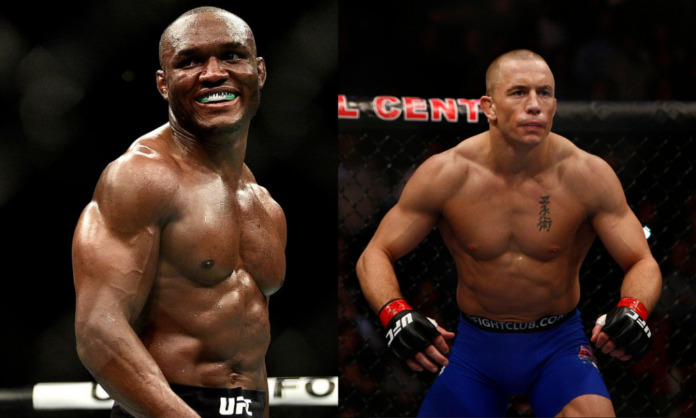 In this Comparing Kings piece, UFC Welterweight greats Kamaru Usman vs Georges St-Pierre. We want to do an apples-to-apples comparison of the two greats, champion vs champion, just the facts.

In Comparing Kings, we try to compare generational greats across eras. We narrow down our comparisons using only statistics and facts.

Usman has been running through his welterweight adversaries and has his next scheduled bout against his rival Colby Covington at UFC 268 November 2021. St-Pierre was the long-reigning welterweight champion and has 13 title fight wins to his name, plus several other records.

One should not make a judgment before understanding all the stats and facts. For Comparing Kings one can see the numbers below. However, for comparing betting apps one can find more information here.

Ahead of March 2019 before Kamaru Usman’s Title Shot against Tyron Woodley, he had defeated 3 opponents who were ranked in the top 10: Leon Edwards, Demian Maia, and Rafael dos Anjos.

Similarly, in October 2006, ahead of St-Pierre’s first title win, he had also defeated 3 opponents who were ranked in the top 10: Sean Sherk, BJ Penn, and Karo Parisyan. Surprisingly, St-Pierre’s 2005 win over title challenger Frank Trigg did not carry much value by the end of 2006. Trigg had left the UFC and had taken a hard loss to future St-Pierre adversary in Carlos Condit.

Kamaru Usman has wins against two NCAA D1 level wrestlers in Covington and Woodley. Covington is quite decorated as a wrestler, winning a FILA World Championship in 2013. The two will rematch in November of this year.

St-Pierre made a career of defeating NCAA D1 level wrestlers, holding an impressive record of 7-1 against them. The lone loss being to Champion Matt Hughes, who St-Pierre would later avenge twice. NCAA Wrestlers defeated by St-Pierre: Matt Hughes (2), Frank Trigg, Josh Koscheck (2), Jon Fitch, and Johnny Hendricks. Particularly notable is Koscheck and Hendricks who were also NCAA D1 Wrestling Champion in 2001, 2005, and 2006.

For these numbers, Strikeforce and WEC championship records were not included. These would be Diaz (4-0), Shields (2-0), and Condit (4-0).

For more statistics and the sources for the statistics, one can use UFC Stats (GSP/Usman), and UFC Record Book – Welterweight. More MMA at MMA Sucka.