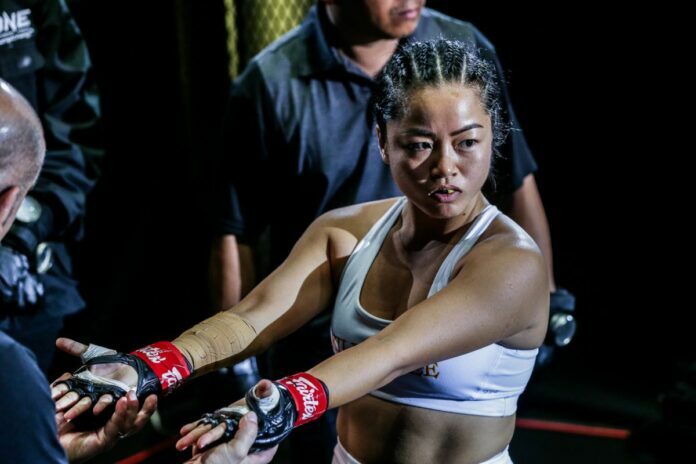 Before the first all-female card in ONE Championship history, ONE: Empower, gets underway on Friday, September 3, there will be two atomweight women battling it out at ONE: Battleground III, a previously recorded event, to earn a spot as an alternate in the ONE Atomweight World Grand Prix.

Bi Nguyen and Jenelyn Olsim will step inside the Circle on Friday, August 27, with the intent of punching their ticket to a meeting against Grace Cleveland.

Bi Nguyen is coming off of a hard-fought victory over Ritu “The Indian Tigress” Phogat. The Vietnamese-American handed the Indian grappler her first-ever professional loss and briefly knocked her out of the ONE Atomweight World Grand Prix. Now, Bi Nguyen is competing to earn a spot on the card, which will serve as ONE’s official return to all-live events in 2021.

However, it won’t be an easy road. Olsim shined in her last outing against Maira Mazar at ONE: Fists Of Fury III.

In a surprising twist, the talented striker submitted the submission specialist in the third round. The Filipina carries the famed Team Lakay banner into this outing to show off more of her ground game and push her way onto next month’s live card.

Olsim’s intent on using her growing skillset may mean that this is not the striker vs. striker battle many might see on paper. Both women have been improving their all-around skills and are more than willing to engage within the clinch and on the ground.

Bi Nguyen has joined Xtreme Couture in Las Vegas to round out her game. She continues to push herself to develop as a complete martial artist. Likewise, Team Lakay’s growth has shown with the likes of Joshua “The Passion” Pacio. Olsim is just the latest star to shine from the Filipino camp.

And then there is what is on the line in their matchup: ONE: Empower awaits the victor.

The stakes are incredibly high. The greatest female Grand Prix in martial arts history will be contested to send the winner into a World Championship bout against ONE Atomweight World Champion “Unstoppable” Angela Lee.

Although the winner won’t be thrust into the field of eight, it is not uncommon for alternates to be needed. In the highly-anticipated ONE Lightweight World Grand Prix, Christian “The Warrior” Lee came into the finals on just 10-day’s notice to win the crown.

Earning their way into the field is an important step on their journey to greatness and gives them a realistic shot at joining the fray and competing for gold.

Find out who can take that first step toward the ONE Atomweight World Grand Prix on Friday.