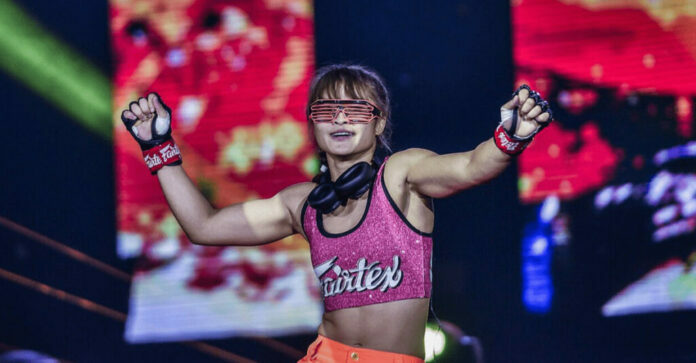 On Friday, September 3, ONE Championship officially returns to all live events with an all-women’s event entitled ONE: Empower.

But for two women, the quarterfinals will also mean a chance to settle a score.

Stamp Fairtex and Alyona Rassohyna square off inside the Circle in a rematch of their controversial match from ONE: Unbreakable III in January.

The Thai star was seemingly in complete control of the action as the bout neared its end. Stamp looked to be well on her way to a unanimous decision victory when Rassohyna locked a guillotine in against the rising star.

The referee saw a tap from the former two-sport World Champion and gave the newcomer an upset victory.

Since that time, Stamp Fairtex has been adamant that she did not tap and feels that she is still undefeated in mixed martial arts. Naturally, Rassohyna sees it differently. The Ukrainian feels that she broke her opponent.

That incredible finish sets the stage for their rematch.

Stamp Fairtex will enter with a massive chip on her shoulder. After losing her ONE Atomweight Muay Thai and Kickboxing World Championships, the quest for three-sport gold was stopped in its tracks. But she can get back on track by advancing and avenging her lone loss in mixed martial arts.

For Rassohyna, a victory erases any doubt from their first encounter and is validation for her #3 ranking in the atomweight division.

It’s a classic striker vs. grappler battle, but the matchup gives both women a chance to showcase how they have improved since their first meeting. Stamp Fairtex has been steadily adding to her ground game which could make her the most dangerous woman in the division.

Rassohyna’s stellar ground game, with 11 career submission victories, may pose a big enough threat that the Thai superstar will want to avoid any mishap this time around and keep the action on the feet.

The stylistic clash is intriguing. The storyline heading into the contest is compelling. Everything about this quarterfinal bout makes it one of the most interesting bouts of September.

Having a heated matchup is exactly the right way to get the ONE Atomweight World Grand Prix kickstarted. Two top-five ranked athletes will settle their score and move a step closer to a shot at the gold. What could be better?

The ultimate prize is not the gold at the end of the road. For Stamp Fairtex and Alyona Rassohyna, ONE: Empower’s sweet taste of victory will be satisfaction guaranteed.

ONE: Empower will air live on Friday, September 3, across all Bleacher Report platforms at 7 a.m. EST/4 a.m. PST.