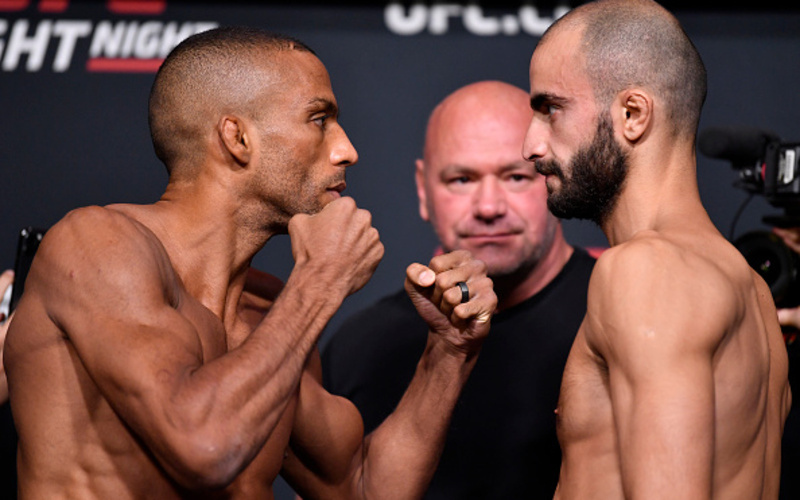 The 29th season of The Ultimate Fighter has come to a close as final matchups go down Saturday as well as a top ten featherweight main event while MMA Sucka provides UFC Vegas 35 Results. Facing off in the main event will be the ninth and tenth ranked featherweights, Edson Barboza and Giga Chikadze.

Since Edson Barboza dropped down to featherweight last year, he has put together a record of 2-1. When he debuted in the weight class, Barboza lost a close split decision against Dan Ige. Since then, Barboza has won his last two straight outings. Following the close loss, he picked up a unanimous decision win over Makwan Amirkhani. And when he last fought in May, he knocked out Shane Burgos in the third round of their UFC 262 bout.

As for Chikadze, he has not lost a fight since he entered the UFC in September 2018. Prior to making his debut, Chikadze held a record of 7-2. Since making his debut, he has put together six straight victories. Chikadze kicked off his UFC career with four straight decisions. His first two wins were back to back split decision wins over Brandon Davis and Jamall Emmers. He would then win back to back unanimous decisions over Irwin Rivera and Omar Morales. Since then, Chikadze has won back to back TKOs over Jamey Simmons and Cub Swanson.

The night’s co-main event features one of two Ultimate Fighter finals going down on this card. In the co-main event will be the middleweight final between Bryan Battle and Gilbert Urbina. Battle was originally set to face Tresean Gore in the final, however Gore was forced out of the fight with an injury. Battle made his way to the final round with a unanimous decision win in the quarterfinals, followed by a submission win in the semifinals. As for Urbina, he won his quarterfinal fight by submission only to lose his semifinal matchup by knockout to Gore. But with the man who knocked him out injured, Urbina still gets a chance to become the winner of this season’s Ultimate Fighter.

Prior to the middleweight final will be the first of the TUF finals on Saturday: the bantamweight final. Facing off in the bantamweight final will be Ricky Turcios and Brady Hiestand. Former Dana White Contender Series competitor Turcios reached the championship round with back to back unanimous decision wins in the quarter and semifinals. Hiestand made it to the end with a split decision win in the quarterfinals followed by a TKO win in the semis.

Kicking off the main card will be a middleweight fight between Makhmud Muradov and Gerald Meerschaert. Muradov enters the fight with an undefeated UFC record, riding a fourteen fight win streak having not lost since 2016. As for Meerschaert, he will be looking to pick up his second win in a row following back to back losses in 2020.

Finally, before the TUF finals begin, there will be a welterweight fight between Kevin Lee and Daniel Rodriguez. Kevin Lee has not fought since March 2020 when he lost to future UFC champion Charles Oliveira by submission. Rodriguez will be entering the fight on a two fight win streak with wins over Mike Perry and Preston Parsons.

Follow along with MMASucka as we provide you with UFC Vegas 35 Results throughout the card.

*Martinez missed weight at 140 pounds and will forfeit 30 percent of his purse.