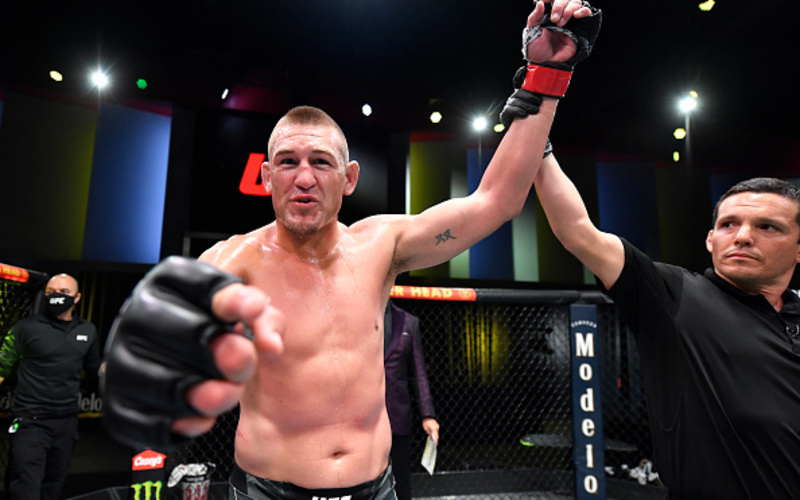 Dustin Jacoby improved to 15-5-1 as a professional mixed martial artist, including 3-2-1 in the UFC, following his TKO victory over Darren Stewart at UFC Vegas 35 on Aug. 28.

After “The Hanyak” took out Stewart in just over three minutes, he is hoping to get back into the Octagon before the end of the year. And he has an opponent in mind: Alonzo Menifield.

“I want to give the fans a show,” Jacoby told MMASucka. “At the end of the day, I think it’d be an exciting fight. To get in there with another striker, if I fight Menifield, we’ll see how long it takes for him to shoot his first shot.”

Jacoby, who is 3-0-1 in his second stint with the UFC, said he anticipated stopping Stewart as quickly as he did after putting in the work all summer long.

“I crossed every T and dotted every I,” Jacoby said. “I knew it was going to go well. I trained to go in there and get the job done as quickly as possible, and that’s what I did. That’s what I pictured the entire camp, and fortunately, I was able to go out there and execute the same way I game planned and the same way I prepared.”

Stewart aimed to take Jacoby down soon after the fight began, doing so once off a Jacoby head kick and then once again soon after. Jacoby believed Stewart would aim to wrestle him, and he was prepared to get up and damage Stewart on the feet en route to a finish.

“Everybody I fight, they say they’re a kickboxer,” Jacoby said. “But they’re very quickly a wrestler. I tell my coaches that there’s no doubt in my mind that he’s going to try to take me down. That’s what we prepared for.”

Following the bout, Jacoby was critical of his performance when he spoke with Paul Felder in the Octagon, to which Felder acknowledged fighters tend to be their own worst critics.

“I wish I could take that back,” Jacoby said. “I just wasn’t able to go in and do as much as I would’ve liked. Stewart did a great job executing his game plan and working his wrestling. Like [Felder] said, we are our own worst critics. After watching the fight, I was happy with the performance. At the time, I just felt like I wasn’t able to completely off as well as I wanted to. Looking back on the fight, I’m very happy with the outcome and pleased with my performance.”

Jacoby believes he is ready for a top-15 or top-20 light heavyweight opponent next. Menifield, while unranked, would almost surely get Jacoby a date with a top-15 fighter should he get the fight and prevail.

Jacoby feels he is prepared for the upper echelon of the 205-pound division, especially following his career in Glory Kickboxing.

“The guys that I fought there; that’s another thing I can take to the grave with me,” Jacoby said. “I know what it’s like to lock horns with these guys. The Michael Duuts and the Alex Pereiras and the Simon Marcuses. Those are guys, who, if you don’t shoot a takedown, they can compete for world championship fights. I went toe-to-toe with those guys.”

It was his entrance into Glory Kickboxing as to how Jacoby began using “The Hanyak” as his fighter nickname. It was a name that his grandmother had given to Jacoby and his brother, which he said means an aggressive athlete.

Jacoby, who did not have a fighting nickname at the time, was preparing for a Glory Kickboxing tournament with three fights in one night.

“That night I was getting my hands wrapped. The guy comes in, he says, ‘Do you have a nickname?’ I said, ‘no.’ He was walking off, I was like, ‘you know what? Tonight I do. Call me the ‘Hanyak.’’ I went in there as the ‘Hanyak.’ I won all three fights by knockout. And the nickname stuck, man. I was the ‘Hanyak’ throughout my entire Glory Kickboxing career.”

The name has since extended to Jacoby’s return to MMA. At Glory Kickboxing, Jacoby chased a world title and earned a title shot. While he fell short against Simon Marcus, Jacoby is proud of the accomplishment.

Having only taken a few MMA bouts during his kickboxing foray, Jacoby had done minimal training in wrestling and Jiu-Jitsu in that span. Jacoby feels he made strides in his striking game due to the focus on his kickboxing. Dustin Jacoby believes his sharp takedown defense will serve him well in his current UFC run.

“With Stewart, I was so comfortable. I knew if the fight hit the ground, I was going to get back up. He did a great job taking me down off the head kick, which is fine. Even my last fight with Ion Cutelaba, he’s a very strong wrestler. He took me down and did everything he could to hold me down. I eventually got back up and he never took me down again after that first 20 seconds in the second round. I know if I can continue keeping these guys off of me and fighting my fight, I think I’ve got a very good chance to make a run at the top.”