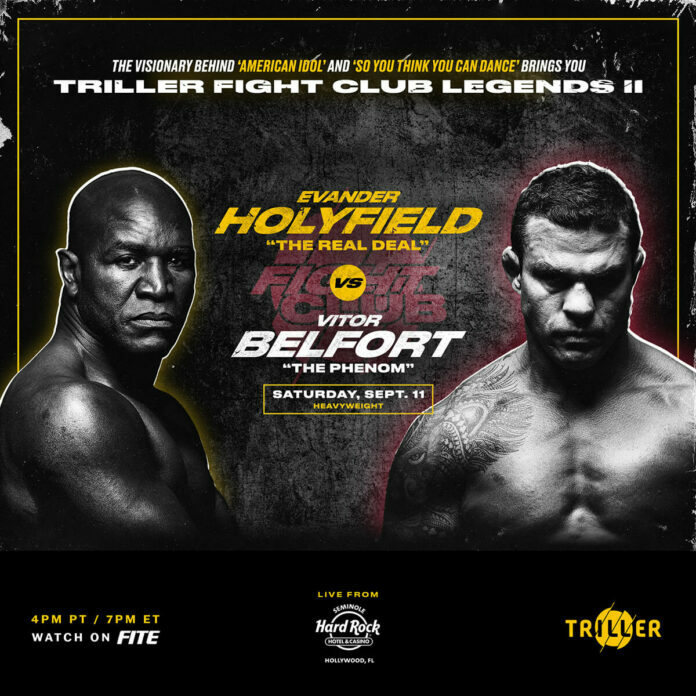 “The Phenom” Belfort last competed with the UFC just over three years ago, concluding a long and storied MMA career. At 44 years old, he will step into the boxing ring competitively for the first time against “The Real Deal” Holyfield. At 58, there is a lot to be asked about what Holyfield has left in the tank. While he looked in shape at the weigh-ins, everything else surrounding the fight’s lead-up for him has left much to be desired.

The Triller Fight Club Legends II co-main event is a fight between two 46 year olds that would have been a dream fight fifteen years ago for UFC fans. However, fans are seeing it tonight in the boxing ring at cruiserweight between former UFC middleweight legend Anderson Silva and former UFC light heavyweight star Tito Ortiz. Silva most recently defeated Julio Cesar Chavez in the boxing ring a few months ago, while Ortiz is on a three-fight winning streak in MMA, but last competed in 2018.

Former cruiserweight and heavyweight boxing champion David Haye returns to action for the first time in over three years as he faces one of his best friends in billionaire Joe Fournier. The bout came to fruition as Fournier, who has a 9-0 boxing record himself, claimed that he could not only beat “The Hayemaker”, but knock him out in the first round. Haye took offense, and the 40 year old agreed to fight him as their friendship is put on hold.

The only bout on the Triller Fight Club Legends II main card between active boxers is a WBA Super Featherweight title eliminator between Andy Vences and Jono Carroll. Ireland’s Carroll and California’s Vences are looking to get a crack at champion Roger Gutierrez with a win tonight, and the fight should be fireworks.

Round 1: Holyfield looks like he’s punching in water. Belfort in his face, but not throwing. A minute in, he lands an overhand left that stumbles Holyfield. He follows with a flurry, and Holyfield slips through the ring. He gets back up, but another flurry from Belfort sends Holyfield to the ground, and it is declared a knockdown this time. He gets up, and Belfort pounces on him again. The ref steps in to save Holyfield from himself as he protests the stoppage.

Round 1: Silva relaxed as always, while Ortiz is tense. Ortiz looking slow and less technical, but applying pressure and crowding “The Spider”. Ortiz has him in the corner, but Silva lands a bomb of an overhand right. Ortiz is out cold, calling an end to the contest just over halfway through the first.

Round 1: Vences comes out with movement while Carroll is more flat-footed. Vences lads a couple of jab-hook combinations to the body in the middle of the round. Carroll picks up the pace with a minute left, but there’s still a feeling out process between the two. 10-9 Vences

Round 2: Carroll continues the momentum as activity picks up. More feints from Carroll, and is landing his jab some. Vences is catching Carroll as he is coming in, though. This fight is much more of a chess match than its predecessor. Carroll gets the round based on activity. 10-9 Carroll

Round 3: More of the same, but Vences picks up the pace himself. He’s starting to make Carroll miss more, and lands a nice right hook to the body with thirty seconds left. 10-9 Vences

Round 4: Vences takes the center of the ring. Carroll pulls Vences’s head down during a combo and is warned by the referee. A right shovel hook from Carroll lands about halfway through as Vences continues to land to the body. Carroll frustrated as the round ends. 10-9 Vences

Round 5: Carroll staying active, and lands a nice three-punch combo as the round reaches the halfway point. About thirty seconds left, Vences lands a right to the body, then a right to the head, but it is not enough to win the round. 10-9 Carroll

Round 6: Carroll is throwing more and more as the fight goes on, leaving Vences no room for action. A nice exchange halfway through the round, but that is the only meaningful action from the Californian for the round, while Carroll is moving around and continuing to throw. 10-9 Carroll

Round 7: Carroll eases off of the gas pedal a tad, allowing Vences to engage in more exchanges. Vences seems to land more and have more of an effect with his punches, but Carroll is still throwing more. This fight is a toss-up going into the last three rounds. 10-9 Vences

Round 8: After a slow start, Vences lands some stinging punches for the second part of the round. Carroll’s nose is reddening, and Vences may have just found his groove. 10-9 Vences

Round 9: The doctor is called as the bell rings, but the reasoning is unclear. There’s some confusion from the referee as to what round it is too. As action begins, a firefight ensues and both fighters are throwing and landing heavy shots. Carroll comes back from one of his more lackluster rounds to apply pressure and take this one in one of his more dominant rounds. He is fired up as the round comes to a close. 10-9 Carroll

Round 10: Final round begins, and Carroll is throwing less. He is jawing at Vences, who is catching Carroll as he comes in with flurries. Carroll picks up the pace in the last minute, but Vences is looking to exchange. A toss-up round and a toss-up fight. This could very well go any way, including a draw. 10-9 Carroll

Round 1: Triller Fight Club Legends II kicks off. David Haye looks massive compared to Fournier. Fournier’s punches look far less crisp compared to Haye, but lands an overhand right about halfway through. Fournier pressuring, but Haye lands a jab and knocks down “The Billionaire”. Fournier gets up and the round ends. 10-8 Haye

Round 2: Haye looks to be getting his groove, landing a 1-2 combo and applying pressure of his own while Fournier lands an overhand right with about 30 seconds left. 10-9 Haye

Round 3: Fournier comes out and crowds Haye. After a short clinch, they break up. Haye looks far more relaxed moving around the ring, but Fournier is not going anywhere. Out in the open, Fournier is hitting air and Haye is landing his jab. 10-9 Haye

Round 4: Haye starting to let his hands go, landing a right hand to the body. A lot of clinch work in the middle of the round, and the round ends with Haye landing a few jabs. 10-9 Haye

Round 5: Fournier charges forward, but Haye easily gets out of the way. Fournier trying to give different looks, but no changes are coming. Haye is no longer getting hit clean whatsoever, while Haye is peppering Fournier with the jab. 10-9 Haye

Round 6: Haye seems to be having his way as the fight goes on, but does not seem to be looking for a knockout. He seems perfectly content with scoring a unanimous decision victory. 10-9 Haye

Round 7: More Fournier whiffs, more Haye jabs. Haye’s head movement is great tonight, but only is throwing jabs and a lazy left hook. That’s enought for him. 10-9 Haye

Round 8: The two embrace as the round begins, as the bad blood seems to have been erased. Once the fighting resumed, however, it is more of the same as Haye should cruise to a decision. 10-9 Haye

Anthony Chavez vs. Diuhl Olguin Ends in a Majority Draw