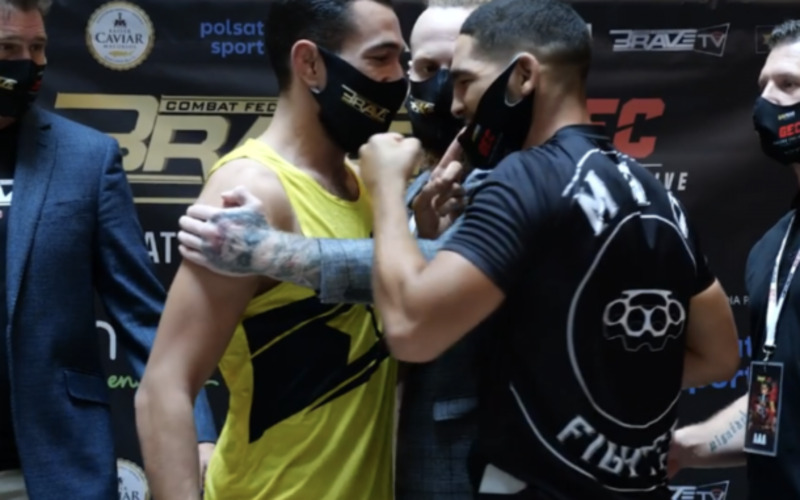 The card’s main event features 25 year old Frenchman “Fierceness” Amin Ayoub making the first defense of his BRAVE CF lightweight title. He will carry his eight-fight winning streak into this fight as he faces 30 year old Egyptian Ahmed Amir. “The Butcher” Amir is unbeaten in his last three fights, and both fighters have long been on each other’s radars as a part of the Bahrain-based promotion. They were originally scheduled to fight at BRAVE CF 50 in April, and the bad blood will finally boil over with the belt on the line.

The BRAVE CF 54 co-main event is at a 130-pound catchweight. Bellator vet and SBG Ireland product Blaine O’Driscoll will step into the cage against British super-prospect Muhammad Mokaev. Originally from Dagestan, “The Punisher” Mokaev went 22-0 as an amateur, and has followed up that success with a 4-0 professional record with one no-contest, which came in his last fight. He has been nothing short of dominant in each of his fights, and has a chance to further prove that he could be a future star for British MMA with this fight. He faces his toughest test to date in O’Driscoll, however, who carries a significant advantage in professional fighting experience.

Two former UFC fighters will be showcased on the card as well. “The Austrian Wonderboy” Ismail Naurdiev split wins and losses in his four UFC outings. Most recently, the 25 year old lost by TKO in the second round of his fight at the aforementioned BRAVE CF 50. He will fight “The Amazing” Olli Santalahti, as the Finnish fighter looks for his third straight win. Meanwhile, “Bomba” Marcin Bandel lost both of his UFC fights by stoppage. The 31 year old will look for his second win in a row in his BRAVE CF debut as he faces “The Tank” Magomed Ayskhanov, a 25 year old undefeated fighter out of Switzerland.

Mohamed Grabinski def. Mihail Kotruta via TKO (Knees and Punches), 4:57 of Round 1

Ewelina Wozniak def. Samin Kamal Beik via TKO (Knee to the Body), 0:30 of Round 2