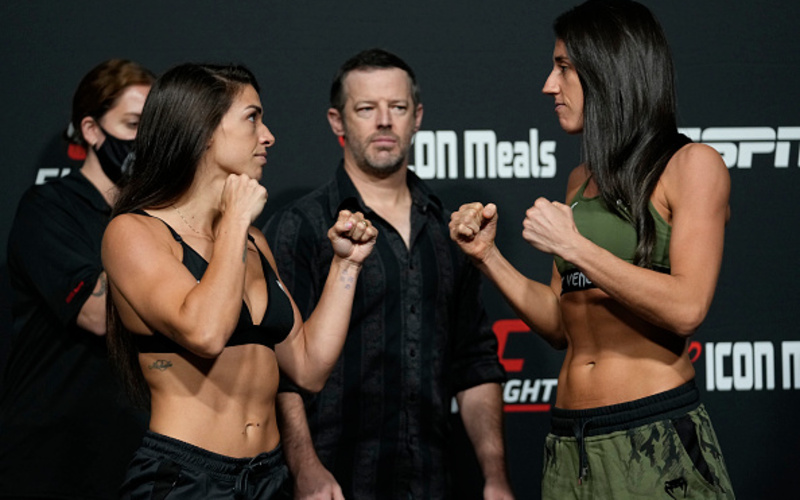 This weekends UFC Vegas 39 will feature a women’s flyweight main event between two top ten contenders. Appearing in her first UFC main event, Mackenzie Dern will be looking for a fifth straight win over Mariana Rodriguez. For Rodriguez, this will be her second straight main event as she enters the fight on a two fight win streak. A win for either woman could put them into the top four of the division with hopes for a title shot soon.

After she lost her first professional fight in 2019, Dern has not lost since, putting together four straight victories. The loss she suffered was a unanimous decision loss to Amanda Ribas. Since then, Dern has won picked up three submission wins over Hannah Cifers, Randa Markos and Nina Nunes. The fourth win that she picked up was a unanimous decision win over Virna Jandiroba. Dern looks to make it five in a row with a big win over Rodriguez.

Rodriguez also started her career undefeated with a couple of draws on her record. Going into 2020, Rodriguez held a record of 12-0-2. Unfortunately, her undefeated record was ruined that year as she was defeated by former strawweight champion Carla Esparza. Since she lost to Esparza by split decision, Rodriguez has won her last two straight. The first win she picked up was a TKO win over Amanda Ribas in round two at UFC 257. In her most recent outing, Rodriguez appeared in her first main event and picked up a unanimous decision win over Michelle Waterson. Picking up a third straight win will be no easy task against Dern, but if Rodriguez can get it done, she will be in the divisions top five next week.

Before the strawweight main event, UFC Vegas 39’s co-main event features a matchup in the welterweight division. Both coming off wins in their recent fights, Randy Brown will be facing off against Jared Gooden. Like Gooden, Brown holds a 1-1 record in his last two outings. The first of those was a loss to Vicente Luque by knockout. In his last fight, Brown rebounded with a first round submission win over Alex Oliveira.

Gooden holds a 1-1 record in his last two outings as well as the first of those was a loss to Abubakar Nurmagomedov by unanimous decision. In. Gooden’s most recent outing, he picked up a knockout win over Nick Stolze. Each man enters the fight looking for a big win to put them at two in a row and knocking on the door to the rankings.

Kicking things off for UFC Vegas 39 will be a bantamweight fight between Chris Gutierrez and Felipe Colares. Gutierrez enters the fight having not lost since 2018 as he has gone 4-0-1 since then. The one loss he suffered in 2018 came against Raoni Barcelos as he lost by submission. After that, he won three straight fights before fighting to a draw. In his last fight, he picked up a unanimous decision win over Andre Ewell. As for Colares, he enters the fight with a 1-1 record in his last two outings. After a unanimous decision loss to Montel Jackson, Colares has since picked up a UD win over Luke Sanders in his last fight.

Following that fight will be a women’s flyweight fight between Sabina Mazo and Mariya Agapova. Mazo enters the fight coming off a loss to Alexis Davis in her last outing which snapped her three fight win streak. Mazo looks to bounce back from that loss and improve her 9-2 record by picking up a win. For Agapova, she enters the fight with an identical record to Mazo’s. In her last outing, similar to Mazo, Agapova suffered a loss that snapped her three fight win streak.

Finally, before the co-main event will be a matchup in the flyweight division as former title challenger Tim Elliott faces Matheus Nicolau. Elliott will be entering the fight on a two fight win streak as he has picked up back to back unanimous decision wins over Ryan Benoit and Jordan Espinosa in his last two outings. Nicolau enters the fight on a three fight win streak as he picked up two wins outside of the UFC before returning and winning a split decision over Manel Kape in his most recent outing.

Follow along with MMASucka as we provide you with UFC Vegas 39 Results throughout the card.