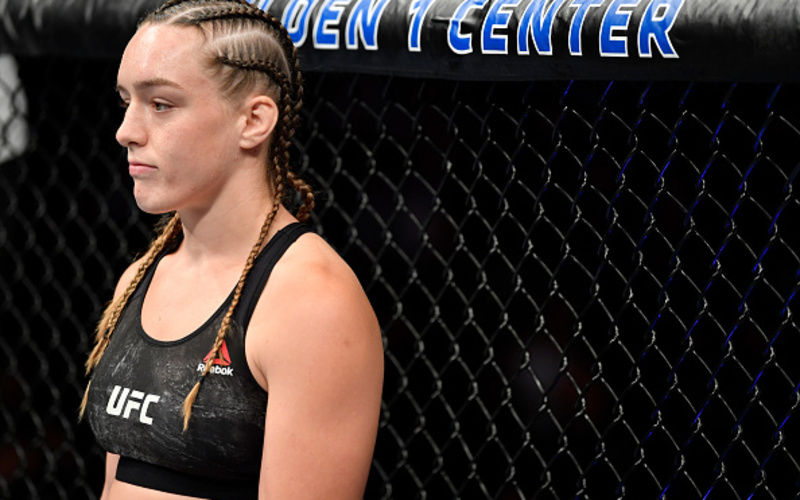 For the second week in a row, this weeks UFC card will be headlined by a female fight, this time between Norma Dumont and Aspen Ladd at UFC Vegas 40. Last week’s UFC Vegas 39 headliner between Marina Rodriguez and Mackenzie Dern provided the fight of the night and we can only hope for more of the same on Saturday night. Ladd steps into this one on short notice, with Dumont facing the biggest test of her short career to date in her first headline slot. For a full breakdown of last weekends main event and a preview for this weeks headliner, be sure to check out the latest MMASucka podcast below:

Originally scheduled to face former champion and multiple time challenger, Holly Holm, Norma Dumont will now have to adapt her gameplan for the UFC Vegas 40 main event. The well-rounded Brazillian only holds a UFC record of 2-1, with an overall record of just 6-1. A loss in her debut against Megan Anderson saw Dumont’s UFC career not get off to the greatest start. With that being said, she bounced back effectively against Ashlee Evans-Smith at bantamweight (although she did miss weight weighing in at 139.5lbs) next time out.

Against Evans-Smith, Dumont’s speed and power really showed. She rocked her opponent multiple times, got her timing down early and allowed her counter striking to dictate the fight. We saw good clinch defence from Dumont, which is something that she will have inevitably drilled for her potential Holly Holm bout. This will pay dividends against Aspen Ladd who favours the ground game. 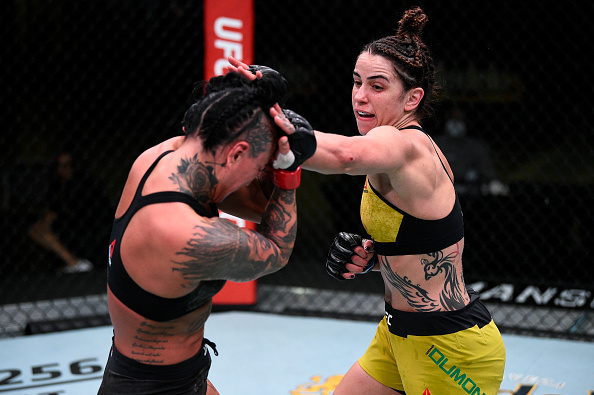 With a win against Ladd, Dumont positions herself at the very top of the featherweight division, being the only real contender for Amanda Nunes’ title. She would be 2-0 at the weight with a victory, having defeated Felicia Spencer last time out. With no other contenders at 145lbs, there is a huge opportunity for Dumont at UFC Vegas 40.

Ladd Steps up on Short Notice

Aspen Ladd steps up on short notice to face Dumont in the main event of UFC Vegas 40. Ladd hasn’t had a fight since December 2019, however, she’s been in fight camp consistently since May 2021. She was scheduled to face Macy Chiasson, however, Chiasson had to withdraw. They were rescheduled for the UFC’s October 2nd card, however, on the day of weigh-ins, she missed weight and wasn’t medically cleared to fight. The fight was consequently scrapped.

Her UFC career has been very up and down since her debut in 2017. Going 3-0 in dominant fashion, she then headlined her first event against Germaine de Randamie. Unfortunately for Ladd, she suffered a 16-second knockout. A fairly fundamental one-two saw Ladd drop. Yes, the finish was controversial and slightly early, however, the fact remains that she lost the bout.

She needs to look to close the distance early and get it to the ground where she can dominate. Her ground and pound is unrivalled and can cause anyone in either the 135lbs or 145lbs division problems.

The fight itself is certainly intriguing as it will see two smaller 145lbs fighters face off. Norma Dumont will look to keep her back off the fence and sting Ladd with heavy shots. Ladd absorbs 4.84 per minute against Dumont’s 2.86. Dumont’s heavy-hitting style sees her put everything into every shot, which could play against her later on in this five-round fight. Dumont holds 100% takedown defence, however, she’s only had to defend three takedown attempts against her. Ladd has landed six takedowns in her UFC career, with an accuracy of 75%.

Dumont needs to look to jump on Ladd early. She’s a notoriously slow starter (as we saw against de Randamie) as well as against Yana Kunitskaya. She was losing the fight convincingly before finishing it in the third round against the Russian. If Dumont manages to bank three rounds before Ladd gets going (remember Ladd had to withdraw from her last bout only two weeks ago due to medical reasons) as she might not fully be ready, she can afford to manage the fight going into the championship rounds. Ladd’s taken almost two years out of the octagon, meaning that there may be a little ring rust, again highlighting why Dumont should jump on Ladd early in the main event of UFC Vegas 40.

Keep it locked to MMASucka this week for plenty of fight week content!