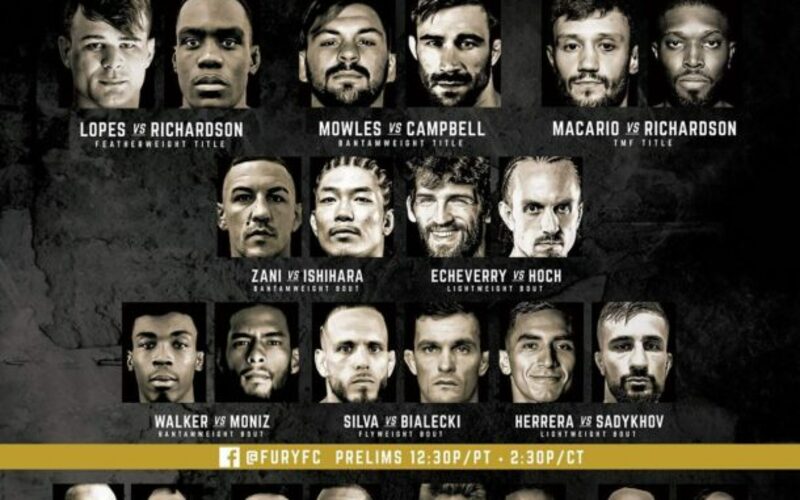 Diego Lopes comes into this fight following his decision loss to Joanderson Brito on Dana White’s Contender Series back in August. Prior to that loss, Lopes was on a seven fight win streak. Eleven of Lopes’ 19 career wins have come by submission. He has never been submitted in his career but has been knocked out in two of his four losses. Lopes will come into this fight with a four-inch height and four-inch reach advantage. His size advantage will be very beneficial for his grappling against a striker like Richardson.

Nate Richardson has a professional MMA record of 8-3 and he is 2-2 since returning to MMA in 2019. Richardson took a break from MMA from 2017-2019 where he went 1-3 in kickboxing. He lives and dies by his striking with four of his wins being knockouts and two of his four losses being knockouts. Richardson also has two submission wins to add to his record. His most recent fight was a split decision loss to Fernando Padilla at LFA 99 in February.

The co-main event will take place between two very experienced guys in Levi Mowles and Johnny Campbell. Mowles is 15-4 and is currently riding a four-fight winning streak. His most recent win is a submission win over Teruto Ishihara at Fury FC 48 in July. In his professional debut, Mowles beat Adrian Yanez. Throughout his career, he has fought high-level opponents such as Tony Kelley, Damon Jackson, Jimmy Flick, Miles Johns, and Reufeon Stots. Mowles has finished 11 of his 15 wins with four being by knockout and seven being by submission. He has never been finished in his career. Mowles comes into this fight with a three-inch height and four-and-a-half-inch reach advantage.

Johnny Campbell was previously booked to fight Mo Miller at Fury FC 53: looking for a fight. When Hector Sandoval had to pull from his fight against Mowles this Saturday, Campbell happily stepped in. As of right now, it still appears that he will be fighting Miller on November 14th after this fight with Mowles. Campbell is coming off a rear-naked choke victory over Henry Corrales at Bellator 258 in May. Johnny Campbell has a professional MMA record of 21-13 with 15 of those wins being finishes. Campbell is tough as nails with eight of his 13 losses being by decision. Campbell is 5-2 since 2019 with one of those losses being a doctor stoppage due to an ear injury.

Rest Of The Card

Teruto Ishihara will also be fighting on this card as he takes on Bellator vet, Vincicus Zani. Zani went 0-2 in Bellator and hasn’t fought since September 2020. At one point, Zani was on a four-fight winning streak and on the road to getting his shot with a big show. He then lost three straight to Ricky Simon, Josh Hill, and Keith Lee. Now, he will be looking to turn his luck around and put together another streak of wins. Ishihara is 0-2 since leaving the UFC in 2019 losing both of these fights by submission. He went 3-5 in his time with the UFC getting wins against Julian Erosa, Horacio Gutierrez, and Rolando Dy. Also on this card, Eddie Hoch will be making his return to MMA after two Bare Knuckle Boxing bouts to fight Fury FC mainstay, Nico Echeverry.

You can catch the entire card on UFC Fight Pass this Sunday!