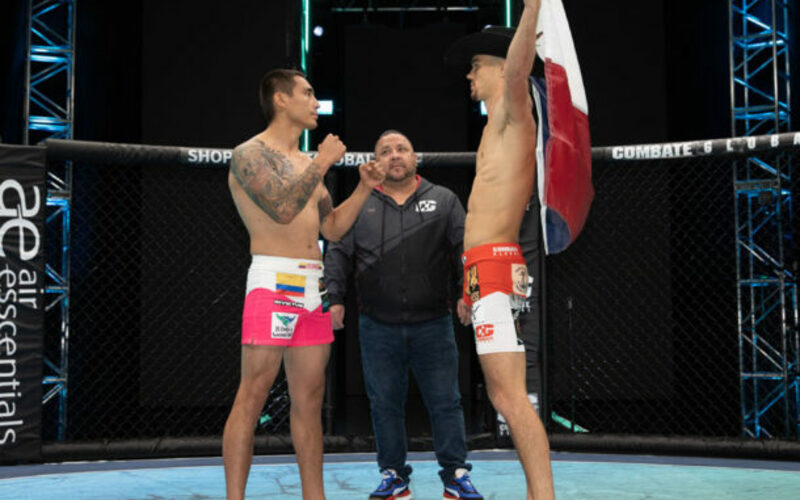 In the main event, surging lightweight prospect, Landry “The Lone Star Kid” Ward (4-0), squares off with tenured veteran, Dumar Roa (16-10). Landry Ward is a highly-touted prospect out of the Goat Shed who looks to remain unbeaten. The 24-year-old Texan is a versatile striker with an underappreciated grappling game. Ward took home a decision victory in his promotional debut, at Combate Global 13, in a war with Alfrego Ruelas. The quick hands of Ward will cause problems for most opponents, however, the way he mixes up his strikes is a recipe for success. He will have his toughest test to date in Columbia’s Dumar Roa.

The 31-year-old has had a tough 2021, losing back-to-back fights for the first time in nearly five years. Like Ward, Roa prefers to keep fights standing considering his kickboxing background. The Columbian has quite the resume after sharing the cage with UFC veterans Sergey Morozov and Felipe Silva. Coming off a loss at Combate Global 19 to Christian Perez, a teammate of Ward’s, Roa will look to get back in the win column and avoid going on a three-fight skid for the first time in his career.

Also on the card, a lightweight scrap between Michael Garcia (5-2) and Luis Gomez (8-5). After winning the Fusion Fight League lightweight championship less than a month ago, Idaho’s Garcia makes a quick turnaround. The 27-year-old is on a two-fight win streak and has been victorious in three of his last four bouts. Garcia is predominantly known for his grappling prowess however, he can stand and bang as well. Expect him to initiate the grappling exchanges as he takes on 13-fight veteran Luis Gomez.

Gomez has beyond a quality resume, as he’s shared the cage with the likes of Dan Ige, Herbert Burns and Chase Hooper, not to mention his victory over Sodiq Yusuff. The Dana White’s Contender Series veteran makes his third walk to Combate’s La Jaula after a split decision loss in the finale of the promotions lightweight tournament earlier this year. As he is 1-1 in the promotion, he will look to bring his always entertaining style to Garcia and earn his second Combate win. In his 13 pro bouts, just four have gone to the judge’s scorecards, so it is clear we are in for a treat.

Some other notable names on the card are surging flyweight prospect hailing out of the Goat Shed, Adrian Garcia (5-1), and highly-touted atomweight prospect Diana Mendoza (1-0).