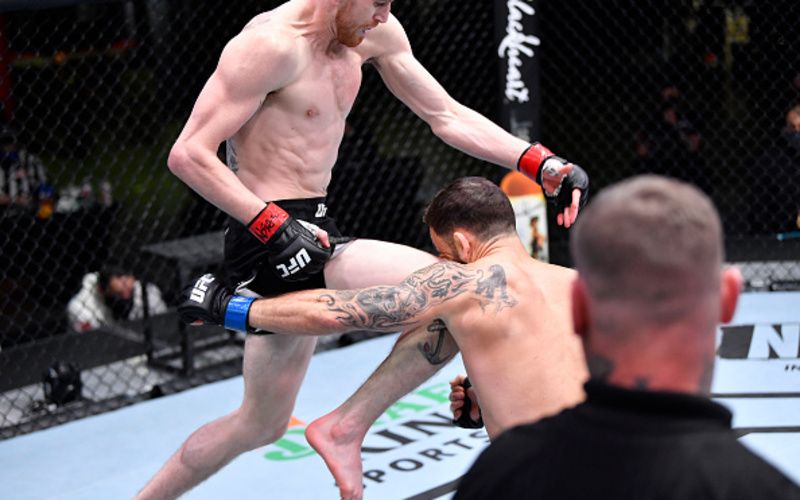 The blockbuster UFC 267 card goes down this weekend from Fight Island, Abu Dhabi. Returning to the venue for the first time since January of this year, the card is headlined by a light heavyweight bout between two well-rounded, hard-hitters. The co-main event sees an interim title bout for the 135lbs strap in what promises to be a banger.

Further down the card we see the return of the most dangerous prospect in the lightweight division, Islam Mackhachev, who takes on the ‘any time, anywhere’ man, Dan Hooker. The UFC 267 card also see’s the return of 2020’s hypeman, Khamzat Chimaev, who went 3-0 in just 66 days during 2020. He faces his toughest test to date in the always game, Li Jingliang. Former top contender, Alexander Volkov returns to action when he takes on the in-form, Marcin Tybura.

We take a look at the top 5 biggest knockouts dished out by those on the card and hope to see many more contenders on Saturday night!

Coming in at #5 on our list is the hard-hitting Russian, Petr Yan. The former bantamweight champion has notched four knockouts in his UFC career thusfar and none have been as impressive as his one over former title challenger, Uriah Faber. In a fight that largely saw the American out-matched wherever the fight played out, Yan dominated. Recording three knockdowns and 54 significant strikes, Yan was never in danger against the veteran, Faber. The finish came when Yan got into a clinch, attempted a trip takedown and consequently pulled the head of Faber down to land a brutal head kick, knocking Faber out. Referee Keith Peterson stepped in to prevent the American from suffering any more damage and Yan left with his hand raised. 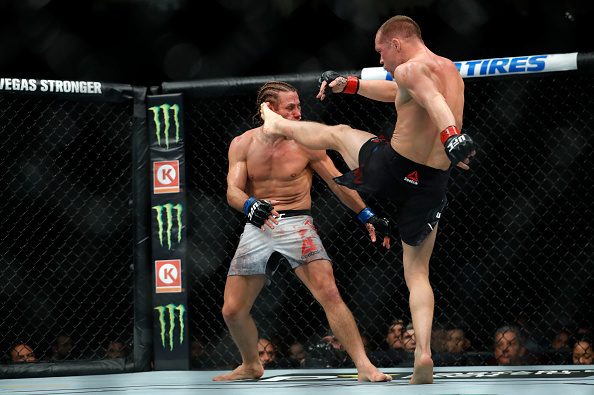 LAS VEGAS, NEVADA – DECEMBER 14: Petr Yan (R) lands a kick on Urijah Faber that sends him to the canvas in the third round of their bantamweight fight during UFC 245 at T-Mobile Arena on December 14, 2019 in Las Vegas, Nevada. Yan won the fight with a third-round knockout. (Photo by Steve Marcus/Getty Images)

Magomed Ankalaev is one of the scariest prospects the UFC have had in a long time. When he faced Ion Cutelaba is promised a barn-burner. Their first fight was stopped in an extremely controversial fashion, which saw a rescheduling. The second fight played out how many thought the first fight would. Cutelaba was the aggressor, fighting on the front foot, looking to land hard and regularly on Ankalaev. The Russian, however, is simply too good a counter striker to allow anyone to do this, especially someone with the skills of Cutelaba. 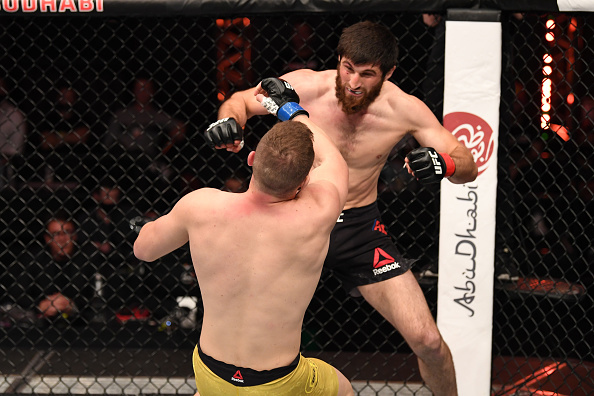 Cutelaba looked to throw a rear kick, stepped through, switched stances and looked to land a right hook. The intention was to get Ankalaev to drop his hands so that Cutelaba could land upstairs to an unprotected target. What played out, however, saw Ankalaev read this sequence, step backwards from a huge overhand from Cutelaba and land a cuffing left hook to a brutal right hook when Cutelaba overswung. The Moldovan was sent crashing to the matt. Seven heavy unanswered shots separated Cutelaba from consciousness and Ankalaev proved that he’s an elite counter striker.

Khamzat Chimaev blasted his way onto the UFC scene in 2020 with three big finishes, none more so than his most recent one over Gerlad Meerschaeret at UFC Vegas 11. Known predominantly as a ground and pound mauler, Chimaev showed something very different in this one. With constant pressure, Chimaev backed GM3 up against the fence, with Meerschaeret likely expecting the takedown. A fairly simple right straight landed flush on Meerschaeret’s chin, knocking him out instantly. Chimaev landed just four shots in the bout (which only lasted 17 seconds itself) including the huge knockout.

What Chimaev will we see at UFC 267, the ground and pound mauler or the one-hitter quitter? 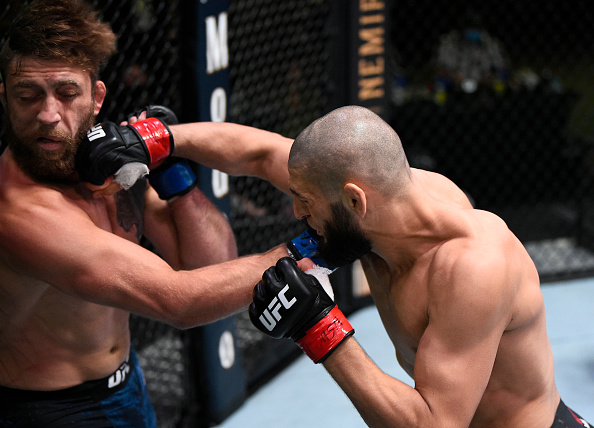 When former middleweight champion, Luke Rockhold made his light heavyweight debut, many believed it to be long overdue. He has always been a huge middleweight and has had to cut a lot of weight to make the 185lbs limit. This is arguably the reason that he had suffered two knockout losses in three fights prior to his 205lbs debut. Firstly he lost his title to Michael Bisping and after a brief bounce back against David Branch, he suffered a brutal knockout loss to Yoel Romero.

The hard-hitting Jan Blachowicz entered his fight against Rockhold coming off a loss to Thiago Santos in a fight night main event. The first round of their fight saw Rockhold look to get in close, work in the clinch and work the takedown. Rockhold looked to set up the high-kick by shooting kicks into the body before going high. With that being said, every shot that Blachowicz landed seemed to have a big effect on Rockhold. The Polish fighter rocked the American massively at the end of the first round and Rockhold made it to his stool having been scrambled.

The finish came in the second round when the two men again clinched. Rockhold looked to shake Blachowicz off in the open but backed out of the clinch with his hands down. A monstrous left hook saw Rockhold knocked out cold before three further shots cemented the victory. A brutally timed shot on the break set up a title shot for Blachowicz who enters UFC 267 looking to defend his title once again. 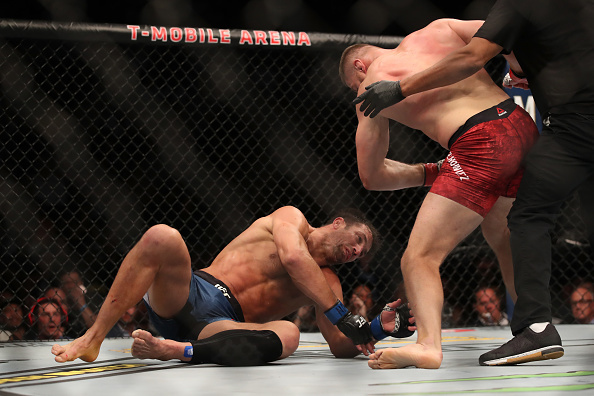 No one likes seeing an OG and legend of the sport get knocked out cold. Unfortunately, Frankie Edgar suffered this fate against Cory Sandhagen. Edgar looked to land an overhand right but as he threw it, Sandgahen landed a phenomenal flying knee.  It took just 28 seconds for Sandhagen to time Edgar coming in having just thrown a leg kick. It instantly slept Edgar, sending him crashing to the canvas. Sandhagen went on to have a fight of the year contender against TJ Dillashaw, which he would ultimately lose, however, fills in for a interim title shot on short notice on Saturday night at UFC 267. 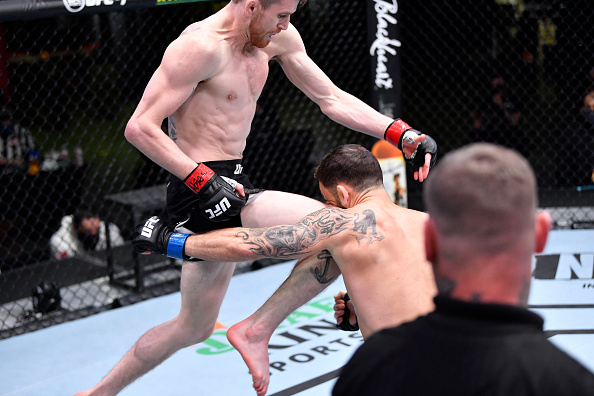 Will we see Sandhagen flying again against Petr Yan in the co-main event? You’ll have to tune into UFC 267 to find out!